Fish in every pond

And there’s only one possible answer to that question:

Take every DNA test you can afford to take.

So while the rest of us can sometimes afford to take a leisurely approach to DNA testing — testing the waters, so to speak, as we dip our toes into the various DNA database pools — adoptees have to dive in.

Think of it this way:

• DNA testing is like fishing for cousins. Cousins who share our genetic heritage, who share some ancestors with us, and who may be sitting out there with the answers to some of our most vexing genealogical questions.

• The databases of the DNA testing companies are the ponds we can fish in. 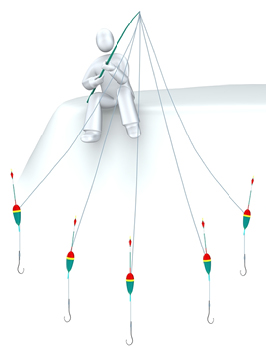 It’s not enough to say that AncestryDNA or 23andMe has the biggest database of people who have tested — although that’s probably true. (The exact numbers aren’t public, so it isn’t possible to say which one is the biggest at any given moment; we just know that both crossed a million this year.1)

And it’s not enough to say that Family Tree DNA has the most dedicated genealogists as users or the best analytical tools for genetic genealogy — although that’s probably true too.2

Fortunately, the price of DNA testing has dropped to the point where testing with all three major genetic genealogy companies is in reach for most folks: you can test with all of the companies for less today than it cost to test with one when autosomal DNA testing first became available.

So… one more time3 … here’s the best way to proceed:

Step 1. Test with AncestryDNA for $99 (US pricing, occasionally a bit less on sale). (To see full matching data and the family trees of your matches, you have to pay a $49 annual subscription fee if you’re not already an Ancestry subscriber. You don’t need to pay that to test and get your raw data, but you will have to pay it to see everything AncestryDNA has to offer.)

Step 2. The minute you get your results from AncestryDNA, transfer your raw data to Family Tree DNA. When I say “transfer,” that doesn’t end your matches at AncestryDNA, it just gets you into the Family Tree DNA system with all of its benefits. You can do this for free but remember: “there’s no such thing as a free lunch.” The information you get with a free transfer is very limited, so either get four other people to transfer in their data or pay the $39 fee and unlock the information right away.

Step 3. When you can afford it, test with 23andMe for another $99 (U.S. pricing), occasionally a little less on sale.

To get the maximum exposure for your DNA, to have the best chance of finding that key cousin, fish in all the ponds.