The Legal Genealogist is at sea. Literally, not figuratively. It’s the FGS Cruise to Alaska, and internet connectivity is … well … spotty at best. 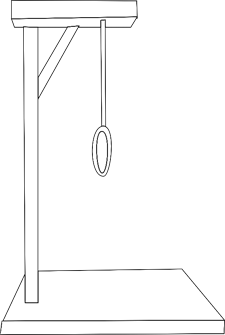 So we’re filling in with some of the language of the law — part Latin, part Greek, part Anglo-Saxon, and all confusing.

• ADULTERIUM. A fine anciently imposed as a punishment for the commission of adultery.1

• AMERCE. To impose an amercement or fine; to punish by a fine or penalty. AMERCEMENT. A pecuniary penalty, in the nature of a fine, imposed upon a person for some fault or misconduct, he being “in mercy” for his offense.2

• AMPUTATION OF RIGHT HAND. An ancient punishment for a blow given in a superior court; or for assaulting a judge sitting in the court.3

• ARSER IN LE MAIN. Burning in the hand. The punishment by burning or branding the left thumb of lay offenders who claimed and were allowed the benefit of clergy, so as to distinguish them in case they made a second claim of clergy.4

• AURES. A Saxon punishment by cutting off the ears, inflicted on those who robbed churches, or were guilty of any other theft.5

• BRANDING. An ancient mode of punishment by inflicting a mark on an offender with a hot iron. It is generally disused in eivil law, but is a recognized punishment for some military offenses.6

• BRANKS. An instrument formerly used in some parts of England for the correction of scolds; a scolding bridle. It inclosed the head and a sharp piece of iron entered the mouth and restrained the tongue.7

• BURYING ALIVE. In English law. The ancient punishment of sodomites, and those who contracted with Jews.8

• CASTIGATORY. An engine used to punish women who have been convicted of being common scolds. It is sometimes called the “trebucket,” “tumbrel,” “duckingstool,” or “cucking-stool.”9

• CORIUM FORISFACERE. To forfeit one’s skin, applied to a person condemned to be whipped; anciently the punishment of a servant.11

• CYPHONISM. That kind of punishment used by the ancients, and still used by the Chinese, called … the “wooden collar,” by which the neck of the malefactor is bent or weighed down.12

• DECAPITATION. The act of beheading. A mode of capital punishment by cutting off the head.13

• DEFOSSION. The punishment of being buried alive.14

• ELINGUATION. The punishment of cutting out the tongue.16

• EMPALEMENT. In ancient law. A mode of inflicting punishment, by thrusting a sharp pole up the fundament.17

• FURCA ET FOSSA. In old English law. Gallows and pit, or pit and gallows. A term used in ancient charters to signify a jurisdiction of punishing thieves, viz., men by hanging, women by drowning.18

• FUSTIGATIO. In old English law. A beating with sticks or clubs; one of the ancient kinds of punishment of malefactors.19

• HANGING. In criminal law. Suspension by the neck; the mode of capital punishment used in England from time immemorial, and generally adopted in the United States.20

• INFALISTATUS. In old English law. Exposed upon the sands, or sea-shore.21

• KEELHALE, KEELHAUL. To drag a person under the keel of a ship by means of ropes from the yard-arms, a punishment formerly practiced in the British navy.22

• METALLUM. In Roman law. Metal; a mine. Labor in mines, as a punishment for crime.23

• PEDIS ABSCISSIO. In old criminal law. The cutting off a foot; a punishment anciently inflicted instead of death.24

• PEINE FOBTE ET DURE. L.Fr. In old English law. A special form of punishment for those who, being arraigned for felony, obstinately “stood mute;” that is, refused to plead or to put themselves upon trial. It is described as a combination of solitary confinement, slow starvation, and crushing the naked body with a great load of iron. This atrocious punishment was vulgarly called “pressing to death.”25

• PRAECIPITIUM. The punishment of casting headlong from some high place.26

• QUARTERING. In English criminal law. The dividing a criminal’s body into quarters, after execution. A part of the punishment of high treason.27

• SANIS. A kind of punishment among the Greeks; inflicted by binding the male factor fast to a piece of wood.28

• STOCKS. A machine consisting of two pieces of timber, arranged to be fastened together, and holding fast the legs of a person placed in it. This was an ancient method of punishment.30

• WHIPPING. A mode of punishment, by the infliction of stripes, occasionally used in England and in a few of the American states.31

As I said… ewwwwww… Makes you awfully grateful for the Eighth Amendment, doesn’t it?