So it’s all their fault. 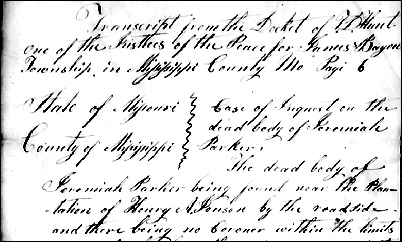 But what better topic to pick up on, here on Halloween 2017, than the topic of unusual ways to die…?

Now I’ll admit I certainly don’t have any examples in my family that rival the ones the NYG&B found in its marvelous sets of published coroner’s records from 1748-1849. Ones like Henry Zeigler, a 35-year-old born in Germany, who died 4 August 1838 when he suffocated in a privy or Griffith Griffiths, a Welshman of unknown age, who died 2 July 1843 after being gored by a cow.2

But I have come across more than a few interesting records in the course of my years of research.

I mean, seriously, you can’t read through coroner’s records3 without coming across the stories.

“Deceased was shot a few days ago,” reads the history section for the report of the death of Soichi Namaya on the first of April 1906.4

“Deceased … went to step from the scow Shasta and made a misstep … and fell into the water where she was Drowned,” reads the history for the death report of Mary Ayscough on the second of April.5

“Deceased has been sick about 10 days they had no doctor to attend to the Child,” reads the history for the death report of two-year-old Ah Fook on April 12th.6

Keep reading that set of coroner’s records and you find the other story:

Yes, those are the deaths of the San Francisco earthquake of 1906. Some of the most compelling surviving records of that stricken city.13

In some of them, you can read the pain, as in the testimony of 28-year-old Godfrey Gehrig, a Swiss-born man who’d lived in America for six years, during the inquest into the drowning death of his 31-year-old brother John in Idaho in May of 1895:

Q. Was your brother in a habit of crossing at the ford.
A. Yes, he crossed a few times at low water.

Q. Is the ford safe for crossing at the present stage of the water.
A. No sir.14

And you can read about the legal complications in some of these cases. In September 1847, in James Bayou Township in Mississippi County in the State of Missouri, there was no coroner when the body of Jeremiah Parker was found on the roadside near the plantation of Henry Jonson. So a justice of the peace, T.D. Hunt, served as coroner.15

He’d have sent the constable for an inquest jury, except the town didn’t have a constable either. So he deputized John Varble to return the jurors for the inquest. They concluded Parker “came to his death by being thrown from a horse against a tree Sept 7th 1847.”16

Folks being shot or drowned or thrown from a train.

Deaths from assault, from too much whiskey, from exposure, from disease, and from “cause of death unknown.”

Seriously… what better topic to pick up on, here on Halloween 2017, than the topic of unusual ways to die…?