The Legal Genealogist could have predicted it.

Should have foreseen it. 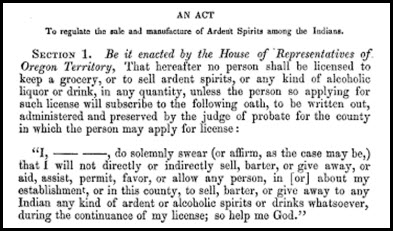 In yesterday’s blog post, I wrote about the 1844 Oregon law that banned ardent spirits — liquor — completely from the territory, and mentioned, simply, that “It was repealed in 1849.”1

The source cited for that statement was a piece from the Highlights of the Oregon State Archives2 and not the statute book itself.

And that prompted a reader to write in and ask: “So… that 1849 repealer … where is it? And did Oregon simply allow all booze at that point?”

Sigh… you’re going to make me confess publicly that in a quick study of the online resources I had… I couldn’t find the repealer, huh?

But after the reader’s question I went back to the statutes and realized that the reason why I couldn’t find it was that the repealer was kind of backhanded: it didn’t actually mention the earlier act by name and didn’t outright say that it repealed the earlier act of prohibition. But it certainly had that effect.

On the 16th of February 1849, the Oregon Territorial Legislature passed, and the Governor signed into law, “An Act To regulate the sale and manufacture of Ardent Spirits among the Indians.” The act provided:

That hereafter no person shall be licensed to keep a grocery, or to sell ardent spirits, or any kind of alcoholic liquor or drink, in any quantity, unless the person so applying for such license will subscribe to the following oath, to be written out, administered and preserved by the judge of probate for the county in which the person may apply for license:

“I, —— ——, do solemnly swear (or affirm, as the case may be,) that I will not directly or indirectly sell, barter, or give away, or aid, assist, permit, favor, or allow any person, in [or] about my establishment, or in this county, to sell, barter, or give away to any Indian any kind of ardent or alcoholic spirits or drinks whatsoever, during the continuance of my license; so help me God.”3

It’s that last section that operated as the repealer for the 1844 law, because it was one of the “acts or parts of acts” that “conflict with this act.”

So what we have after 1849 in Oregon — and that law didn’t take effect until 30 days after passage4 — was a licensing system. With an oath by each person licensed “administered and preserved by the judge of probate for the county.”

Which means, of course, there may be records.

No promises, of course. And it isn’t terribly likely that any licensing records have been digitized by themselves,

But there’s at least one tantalizing hint online at FamilySearch: a collection titled “Probate orders, 1859-1910; liquor license registration, 1904-1912, Clackamas County, Oregon.”5 Can’t see it online if you’re not at a Family History Center, but…

There’s at least some hope that some of these records survive.

Maybe even for your ancestor who was a tavern keeper… or ran a grocery store… in early Oregon.