The Legal Genealogist is in Dallas today as the 2016 Texas State Genealogical Societry conference gets underway.

Three full days of great genealogy. More than 75 separate sessions from more than 35 speakers. And just about every topic under the sun, from DNA testing to the law and court records.

It’s going to be a blast.

And, of course, the law will be one thing I’m going to be emphasizing since — as I’ve said, oh, not more than roughly a kazillion times — we can’t understand the records unless we understand the law.

But Texas legal research can be … um … challenging. It’s got the pre-republic laws of old Mexico. It’s got laws from the Republic of Texas. It’s got early statehood laws and late statehood laws. And the key to understanding the record we’re looking at is finding the right law from the right time.

So yesterday we talked about Gammel’s Laws1 — volumes covering Texas law from the very earliest days. The University of North Texas Libraries have this amazing website called The Portal to Texas History, and Gammel’s Laws are explained there: “H.P.N. Gammel’s The Laws of Texas, 1822-1897 has long been one of the most important primary resources for the study of Texas’ complex history during the Nineteenth Century. … The complete set, volumes 1 – 33 are available.”2 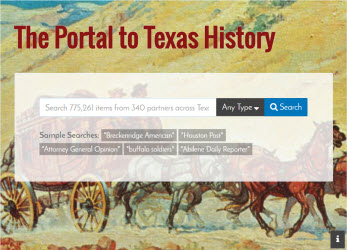 What about after Gammel’s Laws come to end?

Because that amazing website for Texas research, The Portal to Texas History, has more.

And it’s got just about everything you might need to trace Texas laws after Gammel’s Laws come to end.

So you can follow every single solitary meeting of the Texas legislature during those years and review what was passed. The general laws (laws of general application to everyone), like the law passed in 1941 making it a misdemeanor to trap or kill muskrats on private property without the consent of the property owner.7 And the special laws (laws passed for the benefit of a single individual or family), like the law passed that same term allowing Dr. J. R. Nichols of Hunt County to sue the state for damage from the construction of a state highway.8

Oh, and if that’s not enough, check out the collection of Republic of Texas Session Laws and the separate collection, the Texas Laws and Resolutions Archive.

Chances are pretty good one of these collections has what you need.