His name was Hans, and he was born 90 years ago today.

He was the son of Gerhard Nuckel and Lina Sophie Henriette Blanke,1 who were married in Bremen, Germany, in May of 1922.2

And so he was The Legal Genealogist‘s first cousin once removed — and first cousin to my father, whose mother Marie was the older sister of this baby’s father, who was called Gerd.

And he lived for less than a single day. 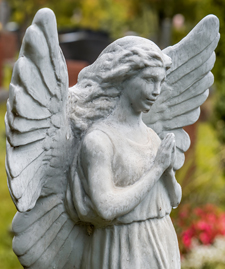 The cause of death is hard to read, but his appears to have been a premature birth (“Frühgeburt”) — and that, clearly, was a great sadness.

But his death was not the only time the Grim Reaper came calling on this couple.

Taking family lore and official records together, Gerd and Sophie appear to have had at least eight children.

As to two of them, all I know is their names — there was a girl called Wilma and a boy called Friedel — and what they looked like in a 1932 photograph found in my father’s papers after his death.4 Wilma looks to be 10 to 12 years old in the photo, and Friedel perhaps 12-18 months old.

As to a third, all I know is that he or she was a twin, born on the 25th of September 1938. I don’t have a name or a gender, only a reference in another child’s birth record of that child being a twin.5

For all of these three, I also know that there is no record of any death of a person who matches what I know that was recorded in Bremen through the last year I can access in the member databases of the Bremen genealogical society Die Maus. That could mean they’re still alive; it could just mean they died somewhere other than in Bremen or after the years for which records are available.6

And as to the other five… well, Hans was one of them. Dead at the age of one day. But he wasn’t the first child Gerd and Sophie lost. Klaus Heinz Nuckel was born on the 22nd of March 1925.7 He was one day short of four months old when he died on July 21st of that year of meningitis (“Hirnhautentzündung”).8

Then there was Hermann Nuckel, born on the first of December 1927.9 He lived roughly a half-hour and appears to have been another premature birth (“Frühgeburt”).10

And there was Gerhard Nuckel, born on the 15th of June 1929.11 He was exactly five months old when he died on the 15th of November of heart failure and diphtheria (“Herzschwäche” and “Diphterie”).12

And there was Gustav Nuckel, born on the 25th of September 1938.13 He wasn’t quite two months old when he died on the 13th of November of some kind of eating disorder (“Ernährungsstörung”).14

And five who did not live to see even a first birthday.

Five little boys — Klaus, Hans, Hermann, Gerhard and Gustav — my cousins whom I never knew. Cousins whom I remember today.