Of oldest and youngest sons

(Note: This post originally ran in July 2012, but the issue arose again last week at the Genealogical Research Institute of Pittsburgh, so it bears repeating…)

Okay, The Legal Genealogist has a confession to make.

I have been unspeakably selfish.

Back in May, I was walking around the exhibit hall at the National Genealogical Society conference when my good friend Barbara Grempler of Archives CD Books USA stopped me to say she had a CD for me — one, she said, that a legal geek like me would love.

And oh boy was she right… and oh boy have I been holding back. It isn’t that I don’t want to share, mind you, it’s just that… well… some of this stuff is just too much fun. 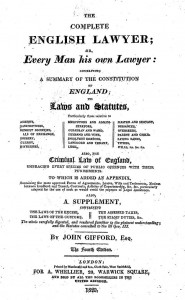 The CD — available here — is of a book by John Gifford, Esq. The short title is The Complete English Lawyer; Or, Every Man his own Lawyer : Containing a Summary of the Constitution of England; Its Laws and Statutes.1 It’s the fourth edition, published in 1820, and … well… have I mentioned yet that some of this stuff is just too much fun?

Let me give you just one example. In the introduction, Gifford notes that “part of the unwritten, or common law of England, are particular customs, or laws which affect only the inhabitants of particular districts.”2 And for this he cites two examples that, quite frankly, took me a bit by surprise. One was the custom of gavelkind and the other the custom of borough-english.

Here’s the deal. We all know that when one of our landowner ancestors died in England and didn’t leave a will, all of his lands went to his oldest son under the rule of primogeniture.3 That was the law following the Norman conquest,4 and the oldest son couldn’t even be disinherited by will until the Statute of Wills in 1540.5

The rule of primogeniture crossed the Atlantic with English common law, and that’s why you’ll see some early wills in colonial America that don’t mention land and don’t mention an oldest son: unless the will specifically said otherwise, land went to the oldest son, period.

Primogeniture was relatively short-lived in America — the first state to abolish it was Georgia, in its constitution of 17776 — but it remained the law in England until repealed in 1925.7

But it was never the law everywhere, even in England. Enter, stage left, gavelkind and, stage right, borough-english.

Gavelkind was the particular custom throughout the County of Kent by which lands descended to all of the sons in equal measure.8 It also existed in small areas of Nottinghamshire, Norfolk, Leicestershire, Monmouthshire, Archenfeld, and Kentish Town near Highgate.9

There were even some areas where the particular custom was for land to descend equally to all sons and daughters.10

Borough-english was a whole ‘nother kettle of fish. Under that rule, Gifford said, “the custom prevails in divers ancient boroughs, … that the youngest son shall inherit the estate in preference to all his elder brothers.”12 As to exactly where the custom was used, sources differ but it appears to have been scattered in some English counties appearing sometimes only in individual manors.13

Now that’s fun stuff. It explains why some wills may be different from others, why some sons may be named and some not, and why some lands were divided and some not.

But there’s something even more fun about Gifford’s account of borough-english. In a footnote, he explained his understanding of how this particular custom came to be: “The reason of this is said to be, that, during the feudal times, the lord claimed the privilege of sleeping the first night with his vassal’s bride; so that the lands descended to the youngest, from the supposed illegitimacy of the eldest.”14

But you see what I mean, right? This is too much fun…