The laws of the church

Look to the law

So… could anybody have been elected Pope?

Did the person elected have to be a Cardinal?

Did the person elected have to be a priest?

Now The Legal Genealogist is sure of all of these answers… but how?

Because of the law. In this case, canon law — by definition, the “body of ecclesiastical jurisprudence which … is composed of maxims and rules drawn from patristic sources, ordinances and decrees of general councils, and the decretals and bulls of the popes.”1 Or, in plain English, the codified, organized, written laws of the Catholic Church. 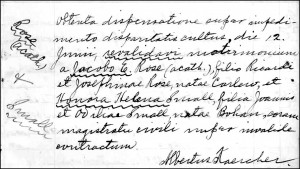 They explain so much about the election of the Pope — and about ordinary every-day records genealogists use and rely on if their families were Catholic.

For the election of the Pope, you can go to Canon 335, which says special laws apply when a Pope is to be elected.2 For the special laws, look at the Universi Dominici Gregis, which basically says any Catholic man can be elected and if he isn’t already a bishop he gets ordained one right away.3

There’s a terrific overall explanation of the process at the Georgetown Law Library website you can read, which boils the qualifications down to this: “a single male of good standing within the Catholic church.”4

So now you know. No, not just anybody can be elected Pope, but the person doesn’t have to be a Cardinal, or even a priest.

But canon law does so much more. Just as one example, it explains the marriage record you see here — the marriage of Jacob E. Rose and Honora Helena Small on the 12th of June 1902, in St. Mary’s Church, Mount Vernon, Illinois. Yeah, I know it’s in Latin; no, that’s not my strong suit either. But what it says, in essence, is that Jacob wasn’t Catholic, he and Honora had had a civil marriage earlier, they managed to get a dispensation for the fact that he wasn’t Catholic, and the religiously-invalid civil marriage was validated in the church marriage.5

In fact, it even tells us that Jacob wasn’t a baptized Christian at all — because the dispensation was of an “impedimento disparitatis cultus” (actually a misspelling; it’s “disparitas cultus”)– an impediment involving someone regarded as an infidel, such as a “pagan, Mohammedan, (or) Jew.”6

What else can we learn from canon law? Well… let’s see here. You find a baptismal record and there are three sponsors listed. Is that a Catholic record or a record from, say, a Lutheran Church? It had better be Lutheran, because canon law limited (and limits) sponsors to two: one male and one female.7

If you find a 19th or early 20th century Catholic baby wasn’t buried in the same plot with her parents, chances are she didn’t live long enough to be baptized. Until well into the 20th century, the unbaptized couldn’t be buried in consecrated ground.10