Embrace me,
My sweet embraceable you.1

So The Legal Genealogist is off this morning — at the obscenely early hour of oh-dark-thirty — to perform her civic duty. 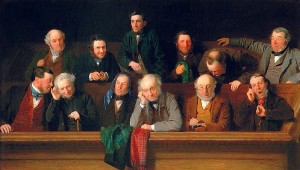 In my case, that’s going to consist of sitting around for hours in a cold, drafty room on hard, uncushioned chairs, for the privilege of being excused from every jury on which she might possibly be called to sit.

The chances that I’d actually be chosen as a juror in any case that might be tried in the county where I live — civil or criminal — are laughably remote. I have a law degree. I used to work first as a prosecutor and then as a defense attorney. I now work full time for the company that publishes the books relied on daily by lawyers and judges throughout New Jersey. I teach part-time at the state’s premier (and state-funded) law school.

And that doesn’t even consider the fact that I tend to be … um … a smart aleck.

Yeah, I’m just exactly the person that every lawyer wants on his or her jury. R-i-g-h-t… 2

But it did get me to thinking… what kinds of laws were there back in the old days about jurors and jury service? And that sent me to one of my favorite sources — Henings’ Virginia statutes — where I came across a gem from 1789.

Here’s the relevant text of the statute:

SECT. 1. BE it enacted by the General Assembly, That all and every person and persons who shall unlawfully and corruptly procure any witness or witnesses … to commit any wilful and corrupt perjury in any matter or cause whatsoever … in any of the courts of this Commonwealth… shall for his, her or their said offence, being thereof lawfully convicted, be adjudged to pay a fine not exceeding two hundred pounds, and to suffer imprisonment for the space of one year without bail or mainprize.

SECT. 2. And be it further enacted, That if any person or persons, either by the subornation, unlawful procurement, sinister persuasion, or means of any other, or by their own act, consent or agreement, wilfully and corruptly commit any manner of wilful perjury … shall for his or their said offence, be adjudged to pay a fine not exceeding one hundred pounds, and to suffer imprisonment by the space of six months without bail or mainprize, and the oath of such person or persons so offending … shall not be received in any court within this Commonwealth…

SECT. 3. If any juror upon any inquest whatsoever, shall take any thing by himself, or another to give his verdict, and shall be thereof convicted, such juror shall not thereafter be put on any jury, and shall pay ten times as much, as he shall have taken; whereof one half shall go to him, who will sue for the same, and the other half to the Commonwealth.

SECT. 4. Every embracer who shall procure any juror to take gain or profit, shall be punished by fine not exceeding two hundred pounds, and imprisonment not exceeding one year.3

Excuse me? A what? Somebody’s making it illegal to hug a juror?

You just have to love the language of the law.

First off, both Black and Bouvier spell the word “embraceor,” not “embracer.”4 Both of them spell the crime as “embracery” and they define it similarly.

Bouvier defines it as “(a)n attempt to corrupt or influence a jury, or any way incline them to be more favorable to the one side than to the other, by money, promises, threats, or persuasions; whether the juror on whom such attempt is made give any verdict or not, or whether the Verdict be true or false.”5 Black says: “This offense consists in the attempt to influence a jury corruptly to one side or the other, by promises, persuasions, entreaties, entertainments, douceurs, and the like.”6

Which, of course, then raises the question of what the heck “douceurs” is or are or were. Turns out neither of the law dictionaries has that term, but the plain ol’ ordinary dictionaries do. Merriam-Webster says a “douceur” is “a conciliatory gift.”7 The Free Dictionary puts it a little more bluntly: “Money given as a tip, gratuity, or bribe.”8

Sigh… no embraces, no entertainments, no bribes.

Probably no hugs, either.

Jury duty just isn’t going to be any fun at all.