It only existed for 13 years, from 1891 to 1904. It had five judges, who were called justices, each paid the princely sum of $5,000 a year, plus traveling and personal expenses while on the road.1 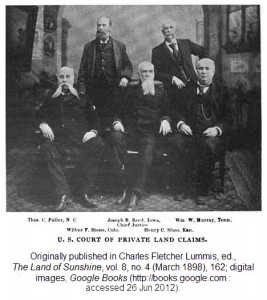 It had very limited jurisdiction — it could hear only one kind of case, and only in six named areas.

And it created a set of records that can knock a genealogist’s socks off.

It was the Court of Private Land Claims.

Whaddaya mean you never heard of it? Why everybody’s heard of — I mean — well — okay, don’t feel bad. The Legal Genealogist hadn’t heard of it either, until I literally stumbled across it while researching something totally different.

The problem was this: large areas of the American west and southwest had originally been under Spanish and later Mexican rule, and those governments issued many large land grants to individuals and to communities. At the end of the Mexican-American War in 1848, in the Treaty of Guadalupe Hidalgo, Mexico gave up its territorial rights to the land but extracted a promise from the United States to guarantee the property rights of the former Mexican citizens.2 That same provision was later applied to the territory acquired in the Gadsden Purchase.3

The first thing Congress did to try to settle the land claims sure to result was create a commission to handle land claims in California.4 In some territories such as New Mexico, a Surveyor General was supposed to determine who owned disputed lands.5 And then Congress itself used its own powers to pass private laws to confirm land patents, titles and grants from former colonial governments.6

Starting in the 1880s, reformers started trying to get a law passed to create a court to review the land claims. Finally, in 1891, they succeeded,7 and so was born the United States Court for Private Land Claims.

The statute created a five-member court, headed by a Chief Justice with four associate justices, appointed by the President with the advice and consent of the Senate, but whose terms were to expire — along with the court itself — on 31 December 1895.8 It was only to review land claims in the New Mexico, Arzona and Utah Territories and States of Nevada, Colorado and Wyoming under any “Spanish or Mexican grant, concession, warrant or survey as the United States are bound to recognize and confirm by virtue of the treaties of cession of said country by Mexico to the United States which at the date of the passage of this act have not been confirmed by act of Congress, or otherwise finally decided upon by lawful authority, and which are not already complete and perfect.” Claimants had to file a petition with their proofs if they wanted the court to confirm them in their lands.9

There was a two-year time period within which claims had to be filed, and if any “minors, married women, or persons non compos mentis” were claimants, the court was supposed to appoint a guardian to handle the claims for them.10

And oh yeah… you might get your land ownership confirmed, but any gold, silver or quicksilver deposits or mines belonged to the United States unless those were explicitly set out in your original grant.11

the docket of this office shows that there are still pending 79 grants in an incomplete condition, of which number 24 grants have been confirmed by the Court of Private Land Claims and 20 rejected. Of these 24 confirmed grants 14 are on appeal before the Supreme Court of the United States, and the 20 rejected grants are also on appeal. There are 35 grants untried.18

The records aren’t particularly easy to find; they’re spread out in a number of different locations and repositories and in different record groups even when they’re at the National Archives. Here’s where to find some of the records of this court:

• Records of the Office of the Surveyor General of Arizona, including the records relating to cases before the U.S. Court of Private Land Claims, 1879-1904, are at the National Archives-Los Angeles.19

• Records of the Office of the Surveyor General of New Mexico, including case files of the claims decided by the Court of Private Land Claims there, are archived in the the New Mexico State Archives in Santa Fe.20 In fact, the New Mexico State Records Center and Archives (NMSRCA) holds all of the Spanish Land Grant Archives records for New Mexico.21

• Some of these case files are available online in the Thomas B. Catron Papers of the University of New Mexico’s Center for Southwest Research Digital Manuscript Collections. Either search the collections using the search boxes or click on the Catron Land Grant Cases to browse the files. They’re also available on microfilm.

• In its “Land Grants of New Mexico,” the New Mexico Office of the State Historian sets out a history of many of the grants in New Mexico and what became of them. And see “Land Grants,” the New Mexico Commission of Public Records, State Records Center and Archives, Archives and Historical Services Division, with a more detailed bibliography of resources for further research at the New Mexico State Archives.

It’s clear that there’s more out there — from the other territories and states, for example — but the wealth and depth of this material is stunning. Just in the New Mexico materials, there are documents created between 1682 and 1846 obtained starting in 1855 by the Surveyor General of New Mexico in support of claims.22 Names, dates, places, inheritances, relationships — all spelled out in support of claims.

And there’s more court documentation out there too; there are still the records relating to appointments to the Court in Personnel Records 1844-1947, General Records of the Department of Justice, Record Group 6023 and the case files of the United States Supreme Court in Record Group 267, both at the National Archives in Washington, D.C.24

And all from a court it’s a sure bet most of us had never heard of before.