Was he or wasn’t he?

It started out as a typical American story. Mom, Dad, three sons and finally a daughter. But when Mom and Dad threw in the towel on their marriage two years after the daughter’s birth, Dad announced that that was one thing he wasn’t — the dad, that is, of the daughter. 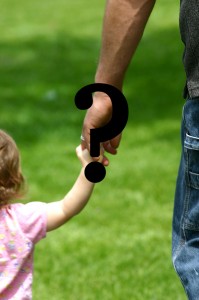 Now, a reader reports, the family would like to know the truth: was he or wasn’t he the father of the youngest child? Both Mom and Dad are gone now. The daughter is grown and married with a son of her own; her three older brothers are all alive and there’s no reason to suspect any of them might not be the child of both Mom and Dad. So, the reader asks, is there any way a DNA test can give this family the answers they want?

The answer is yes. And it’s actually a pretty easy proposition these days with autosomal DNA testing. That’s the kind of DNA testing that works across gender lines so you don’t have to find a direct male line from father to son to son (YDNA or Y-DNA1) or a direct female line from mother to daughter to daughter (mitochondrial DNA or mtDNA2) — neither of which is an option in this case.3 It tests DNA from all of the chromosomes except the gender-linked X and Y chromosomes,4 and produces information that — used in this situation — can distinguish full siblings from half-siblings.

With any other sibling pair — even fraternal twins5 — both will still get 50% of their DNA from their father and 50% from their mother, but it won’t be the same 50% from either parent. That’s because of what’s called recombination, the random shuffling of DNA segments that goes on in each generation.6 On average, then, any non-identical sibling pair will share about 50% of their total DNA. That’s roughly the same amount of DNA each person has in common with a grandparent or an aunt or uncle.7

So if any one of the brothers in this family’s situation will agree to be tested along with the sister, they will be able to determine if they are full siblings… or not. There’s no benefit to also testing the sister’s son — his DNA results won’t add to this picture at all.10 Testing more than one brother can’t hurt, except in the pocketbook. And I’d definitely go with autosomal testing rather than what’s called sibling or kinship testing because it tests more of the overall DNA.11

Generally, for DNA testing for genealogical purposes, I tend to recommend the Family Finder autosomal DNA test from Family Tree DNA because it’s designed by genealogists for genealogists and you tend to get more information from cousins you discover through the testing process. But this is one situation where I’d recommend the Relative Finder autosomal DNA test from 23andMe. And I do so because 23andMe has one option, called Family Inheritance : Genome View, that displays the results just the way I’m describing them here: you can actually see whether two people have any segments that are completely identical (they share both parents) or not (they share only one parent).

And, of course, if this family decides to go on and use the testing for their family history research, they can transfer their 23andMe results to Family Tree DNA and use both systems — the best bang for the DNA buck.12