It’s time to wish those ancestors a happy anniversary! 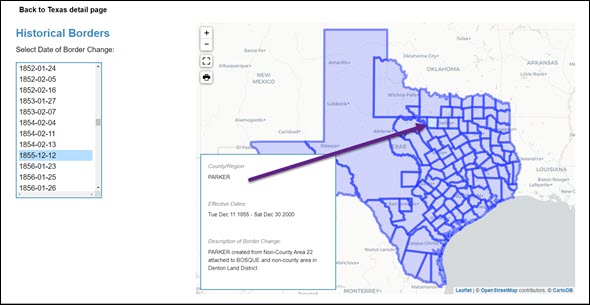 Then again, it could have been that they married on 6 December 1854 in Johnson County, Texas.3

Which did exist in 1854, but didn’t include the area where the Bakers and George Cottrell lived.4

Or maybe it was 6 December 1854 in what was then Johnson County and is now Parker County.5

Which, as noted, wasn’t in Johnson County then or ever.6

Most likely the marriage was performed by a circuit-riding preacher who recorded it in the first courthouse he came to on his circuit.

Except that the one record that documents the minister who performed it — Martha Louisa’s widow’s application for a pension — names him as Rev. Nelson Hunter.8

And of course there is no record of a Nelson Hunter in Texas in the 1850 census.

Or in the Texas newspapers of the day.

Or in any church records that I can find.

I love my second great grandparents.