The enigma of a cousin, part 1

Note: Because of an issue in the HTML rendering of this post on some (but not all) devices and browsers, this post is being reposted, in two parts… apologies to those who got the whole thing correctly — and here’s hoping for those who need it in two parts to keep the end of the post footnotes from rendering as gibberish….

All that isn’t known of a lifetime, part 1

Just who was Mattie Lee (Cottrell) Berens… and what was she like?

The Legal Genealogist would love to have a really good answer to those questions… but there’s an awful lot about this cousin that we may never know. 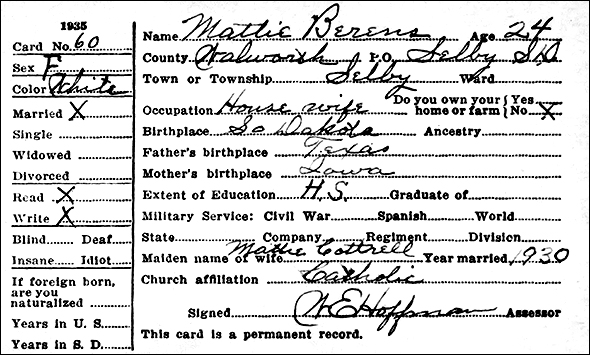 What we do know is that John W. Cottrell, my grandfather’s oldest brother, married Emelia Beitelspacher, in July 1908 in Java, Walworth County, South Dakota. John was shown as American-born, age 28, and Emelia as 18, and Russian. The marriage was performed by the pastor of the Lutheran Church in Java.1

Their child, my first cousin once removed Mattie Lee, was born 110 years ago tomorrow — 24 May 1910 — in Walworth County, South Dakota.2 It’s probably a safe bet that she was born in Mobridge since that’s where she was enumerated with her parents on the U.S. census on 4 June 1910.3

She was not quite three years old when her mother died. The stone for Emma, “wife of J.W. Cottrell,” born 13 June 1890 and died 6 April 1913, stands in the Mobridge City Cemetery.4

There’s no record we’ve found of the mother’s death so, at this point, we don’t know just what happened to her. She was not quite 23 years old, so was it illness? Childbirth? We simply don’t know. And who were her parents, Mattie’s maternal grandparents? You’d think it would be easy to find Beitelspachers in South Dakota or that general part of the country in the 1900 and 1910 censuses, and Emelia/Emma would have been just 10 years old in 1900. But alas… despite some hints, nothing that definitively puts this young mother into the right family that I’ve stumbled across as yet.

There are scattered records for Mattie over the years:

• She was enumerated as a five-year-old living in Trail City, Corson County, in the South Dakota state census in 1915.7

• She was enumerated as a nine-year-old schoolgirl in Trail City, by then Dewey County, in the federal census in 1920.8

• She was enumerated as a 14-year-old schoolgirl living in Trail City in the South Dakota state census in 1925. She was shown as white, Catholic, able to read and write and with a ninth grade education. Her father’s birthplace was recorded as Texas; her mother’s as South Dakota.9

• At age 17, she was on the school records of Mobridge, Walworth County, along with her brother Philip, shown as age eight in one undated record and age nine in another. That would put those two records somewhere around 1928-29.10 On another, for the school year beginning May 1, 1930, only Philip was shown, as age nine.11

• In 1930, Mattie was enumerated in the federal census as a 19-year-old cashier in a restaurant in Mobridge and lodging with her stepmother’s brother and sister-in-law, William and Emma Claymore.12

Cite/link to this post: Judy G. Russell, “The enigma of a cousin, part 1,” The Legal Genealogist (https://www.legalgenealogist.com/blog : posted 23 May 2020).