Robert Grant Norton was born in Lubec, Maine. A Navy veteran of World War 2, he and his second wife were on their way to California for her son’s wedding.

He never made it.

The 85-year-old’s life was cut short, eighteen years ago today.

He and his wife were passengers on American Airlines Flight 11 from Boston to Los Angeles.

At 8:46 a.m., exactly 18 years ago today, they perished when that plane was deliberately flown into the North Tower of the World Trade Center.

Christine Lee Hanson would have celebrated her 20th birthday in February of this year.

Such a bright future… such promise… a life cut short, eighteen years ago today.

The two-year-old girl, her father Peter Burton Hanson and her mother Sue Kim Hanson were passengers on United Airlines Flight 175 from Boston to Los Angeles 18 years ago today.

At 9:03 a.m., exactly 18 years ago today, all three perished when that plane was deliberately flown into the South Tower of the World Trade Center.

Lost on that day 18 years ago today.

A day nobody alive then will ever forget… not for one minute… 18 years later.

Those of us who were alive then remember how the events of September 11, 2001, were fast-paced and horrific:

• At 8:46 a.m., American Airlines Flight 11 out of Boston, Massachusetts, crashed into the north tower of the World Trade Center. That’s when the Nortons died.

• At 9:03 a.m., United Airlines Flight 175 from Boston crashed into the south tower of the World Trade Center and exploded. That’s when the Hansons died. And both buildings were burning.

• At 9:37 a.m., American Airlines Flight 77 out of Washington Dulles, crashed into the western side of the Pentagon and exploded. All on board and 125 in the Pentagon were killed.

• At 9:59 a.m., the south tower of the World Trade Center collapsed, crashing into the streets below.

• At 10:03 a.m., United Airlines Flight 93 was crashed by its hijackers into a field in Pennsylvania after the passengers made a desperate attempt to retake the aircraft. All on board died.

• At 10:29 a.m., the World Trade Center’s north tower collapsed from the top down. A cloud of ash turned day to night in the narrow streets of lower Manhattan.

In those few horrible moments between 8:46 a.m. and 10:29 a.m., nearly 3,000 men, women and children lost their lives to senseless, mindless, blind hatred. Robert Grant Norton, the oldest. Christine Lee Hanson, the youngest. So many people — among them my neighbors, my colleagues, my friends — wiped from the face of the earth.

Some in a heartbeat. Vaporized as murderous fanatics drove crowded airplanes into first one, then the other of the towers of the World Trade Center.

Some in the corridors and hallways of the Pentagon.

In the end, gone… all gone.

Gone because a few hate-filled men thought the world would be changed if they murdered all of those people.

Those of us who were alive that day remember it all. We remember as though it happened yesterday. And… sigh… we remember how there was a time, just after that day, when it seemed as though perhaps the world had changed — but for the better. When so many of us seemed to care more, to reach out more, to consider how very precious are the lives of those we love and how little it might take to lose those people in a blinding flash of an instant. We seemed to be taking time to say those very difficult words more often: “I love you.” And we even seemed to mean them more.

No longer. The country the terrorists attacked is one I don’t see much anymore — a place where people read, and asked questions, and challenged ways of thinking, and rejected closed minds, and protected human rights and civil rights, and abided by and valued the rule of law. It was a place where justice was to be achieved at the ballot box and in the courtroom — not by pointing a gun or blowing up a building. Where dissent was valued and the right to dissent was sacrosanct. It was a country where we strove to make everyone equal under the law, where people worked to see that opportunity would not depend on race or gender. It was a country that claimed to value tolerance, and charity, and love. Love of country, love of family, love of freedom.

It seems that we have lost that country in a wave of nativist, xenophobic, racist, homophobic, misogynistic fear… And if that is our new norm, if people marching in the streets with torches and Nazi flags are where we are, if we tear children from their parents and refugees from their hope of asylum, if we build walls rather than lengthen tables, then the terrorists got what they wanted. They will have changed our world, forever. And it will be more because of what we have done to ourselves than what they did to us.

Yet I must put that all aside today.

Today, and every year on this day, I must do what I swore I would do, 18 years ago, as I walked with my friend Toni through the streets of lower Manhattan, and stared at the posters with the faces of the missing, and at the empty firehouses, and at the twisted steel girders.

I promised that I would remember.

To make sure that I do not forget.

That we do not forget.

That all those lives will never be forgotten.

To say, one more time, this year and every year,1 as long as I have life and breath, in words and images, NEVER FORGET. 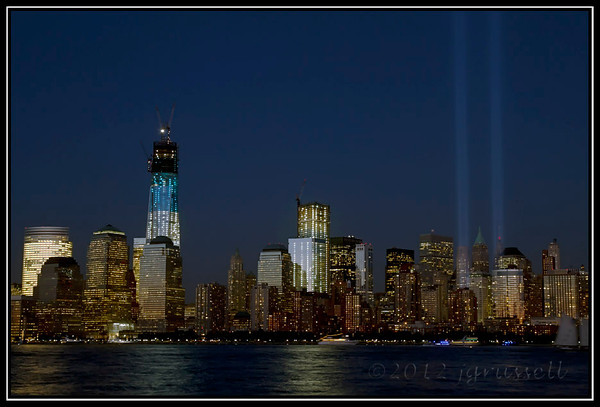