Do a labor of love

Even though it’s a Monday.

Not here in the United States.

This day, this first Monday in September,1 is a holiday here in the United States:

Be it enacted by the Senate and House of Representatives of the United States of America in Congress assembled, That the first Monday of September in each year, being the day celebrated and known as Labor’s Holiday, is hereby made a legal public holiday, to all intents and purposes …2

Today, we call it Labor Day — a day to celebrate the efforts of all those who came before us to give us amazing things like eight-hour work days, 40-hour weeks, paid vacations, employee health benefits, worker safety laws, compensation for on-the-job injuries and so many of the other myriad benefits we think of today as perfectly ordinary and routine.

Each of these was fought for by our working ancestors and the unions they formed to stand up to big business. They fought for them, and sometimes died for them. 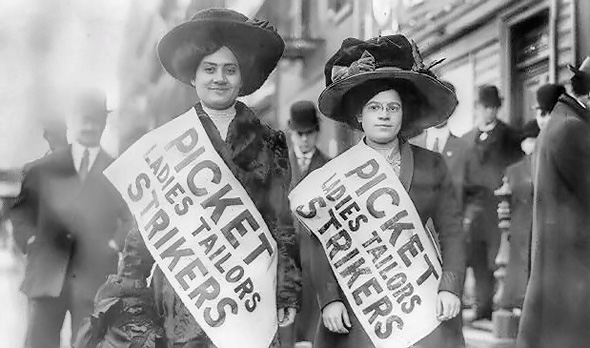 And where do we look for records of our labor union ancestors?

One of the best reference sources for labor union research is the vast assortment of union newspapers published over the years. The Duluth (Minn.) Labor World, for example, began publication in 1896;3 the New York Union and Trades Advocate began publishing around 1865.4 Information about these and many other union newspapers is available through the Library of Congress’ historic American newspaper collection Chronicling America.

If you go to the site’s U.S. Newspaper Directory, 1690-Present, you can opt for only labor press newspapers in the “More search options” section at the bottom, and limit the results to just the publications that focused on the labor movement.

And, of course, you can look beyond newspapers to the vast array of archival material on the labor union movement itself. A search for the term “labor union” at ArchiveGrid, for example, turns up more than 16,000 hits ranging from the Paducah Central Labor Union in the special collections of the Murray State University library in Kentucky to the papers of maritime historian Harold H. Huycke at the San Francisco Maritime National Historical Park. Even making it an exact term search returns more than 2,000 hits:

• The oral history collection at Wayne State University’s Walter P. Reuther Library of a wide variety of people who played roles in trade-unionism in the United States.

• The Tish Sommers papers at San Diego State University, focusing on women’s movement activists from 1970 to 1985.

• The United Brotherhood of Carpenters and Joiners, Local 132, archives at the University of Maryland.

And there are a number of overall collections that are simply not to be missed:

• The Manuscripts and Records Collections of the Walter P. Reuther Library at Wayne State University in Detroit. Its holding include everything from microfilmed copies of record of the AFL-CIO to microfilms of the Western Federation of Miners Records from the Idaho State Historical Library, plus many many union newspapers. Online galleries of images focusing on the labor movement and organizations offer more than 3,600 images.

• The National Women’s Trade Union League of America records held by the Library of Congress, Manuscript Division. Some 7400 items including correspondence, reports, speeches and biographical information on the league’s officers are included.

• The Southern Labor Archives of the Georgia State University Library, which is “dedicated to collecting, preserving and making available the documentary heritage of Southern workers and their unions, as well as that of workers and unions having an historic relationship to the region.”

• The Wirtz Labor Library of the U.S. Department of Labor documents the history of the labor movement and labor unions in the United States. Among other things, the library holds more than 3000 labor journals and newspapers.