Remembering those who are not

It’s a photograph The Legal Genealogist comes back to, time and time again.

A photograph of one half of my family. 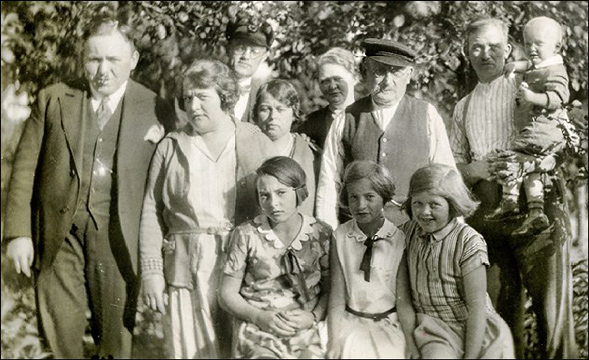 The people in this photograph are my father’s grandfather, his aunts, his uncles, his cousins.

With his parents, my grandparents, they make up fully half of the people I should have grown up knowing.

And they are, every last one of them, from the half I never met.

Some of them, like my own grandparents and my great grandfather, were dead before I was born.1

Others lived well into my lifetime: at least one of my father’s aunts that you see in this photo — my Grand Aunt Gretel — lived until 1970.2

Yet I never even heard her name until I got into genealogy, after my father had also passed on.

So I stare into these faces and I wonder what it would have been like if I had had the chance to know them. To hear their stories.

And I stare at it even more as I think about those who should be in this photo.

And who are not.

One of those who should be there — my father’s first cousin, so my first cousin once removed — is Hermann Amko Hinrich Lauterbach.

He should be in the front row of this photo, dated on the back in my father’s careful German handwriting as 1932.

He might have been placed second from the left, between his cousin Henni Thoms and his sister Erna Lauterbach.

At 12, he’d have been the oldest, though — born 25 January 1920,3 he’d have been just a few months older than Henni, who wasn’t born until December of that year. So maybe they’d have lined them up by age and he’d have been first.

His mother — Marie Juliane Margarethe (Nuckel) Lauterbach — called Gretel — is the short woman peering out from behind her larger taller sister, Adelheid (Nuckel) Thoms. His father, Gretel’s husband Amko, is the tall man in the hat and glasses in the back.

Looking at his sister, and adding my father’s coloring into the mix, my guess is that he’d likely have been a blue-eyed blond, though the Nuckels in general were a bit darker-haired.

I certainly expect he’d have been spoiled, this boy in a family that ran largely to girls, the way his cousin, my father, was spoiled. Doted on. Counted on to carry forward the family honor and his father’s name.

He’d have been the one my father would have hung around with, the one time my grandparents brought him back to Germany, in the summer of 1930. Maybe they’d have gone hiking in the woods, or played ball on the cobbled stones of Elisabethstrasse, where the Lauterbach family lived.

My father was just 17 months younger than his cousin, and at nine and 10 years old these boys were still of an age to think the girls had cooties or something worse.

And when war came between the two nations these cousins called home, these cousins surely would have done everything they could have to avoid ever having to meet the other down the barrel of a rifle.

None of which, ever, came to pass.

Not the cousins romping through the German woods in the summer of 1930. Not the picture in 1932. Not the spoiling. Not the fear of cousin meeting cousin in the war.

Because, like so many others in my father’s German family, Hermann Amko Hinrich Lauterbach didn’t live long enough for any of that to become real.

He was just five years and four months old when he died in the hospital.

His death certificate doesn’t say what killed him.

And it doesn’t say what hopes and dreams and, yes, fears died with him that June day.

That day — exactly 93 years ago today — when the German family I might have known became a little bit smaller.

And my chances of ever meeting anyone from that side dropped just that much more.