Back to work… with the Library of Congress

The Legal Genealogist is back on U.S. soil. 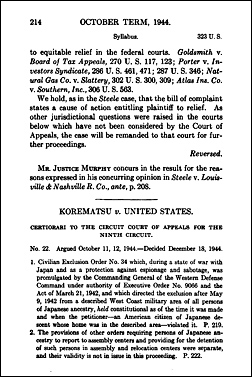 After all these days of wandering around Down Under, I may not be entirely certainly as to just where I am at the moment.

I am definitely not certain as to what time zone I’m in.

Because it has just put an entire collection of more than 35,000 U.S. Supreme Court cases online, for free, thanks to an agreement with the William S. Hein & Co., Inc., and there are some amazing genealogical gems in those case reports.

What… you don’t think there’s genealogical information in decisions of the U.S. Supreme Court?

Boy, are you wrong…

The case tells the story of one Hugh Stephenson of Virginia. And, according to the agreed-upon facts:

Previous to the year 1775, Hugh Stephenson, of Virginia, lived and cohabited with Ann Whaley, and had by her the appellants in this cause, whom he recognized as his children. In July, 1775, he made his will, in which he described the appellants as the children of himself and of his wife Ann and devised the whole of his property to them and to their mother. In July, 1776, he intermarried with the said Ann Whaley, and died the succeeding month, leaving her pregnant with a child, which was afterwards born and was named Richard. The will was duly proved after the death of the testator. In June, 1776, the testator was appointed a colonel in the Virginia Line upon continental establishment, and died in the service. After his death and the birth of Richard, a warrant for 6,666-2/3 acres of military lands was granted by the State of Virginia to the said Richard, who died in the year 1796 in his minority, without wife or children, and without having located or disposed of the above warrant. His mother also died before the year 1796. The defendant claimed the land in controversy under John Stephenson, the elder paternal uncle of Richard, and the appellants having filed their bill in the court below to recover the premises in question, the same was dismissed and the cause was brought by appeal to this court.1

Births (illegitimate and otherwise), deaths, a marriage, military service, a bounty land grant and more — all in one paragraph of facts.

Not bad. Not bad at all.

True, not every case has that kind of genealogical detail. But even those that don’t can often help us understand and tell the story of our history as well. Case in point: what is generally regarded as the single worst decision ever handed down by the U.S. Supreme Court: Dred Scott v. Sandford, 60 U.S. (19 How.) 393 (1856). The pre-Civil War decision that a man of African descent couldn’t be a citizen and so couldn’t avail himself of the protections of the federal courts.

Or the equally shameful decision of the Court in 1944 that the interment of American citizens of Japanese descent was lawful: Korematsu v. United States, 323 U.S. 214 (1944).

Now… two caveats to my enthusiasm.

First, the collection isn’t completely word-searchable. You’re going to need the name or citation of a case to retrieve it.

And, second, there are some limits on the use of this collection. The rights advisory from the LOC says:

The vast majority of the U.S. Reports is in the public domain as a work of the U.S. Government. However, where the U.S. Reports reprints copyrighted material, copyright protections may apply. For those instances, you’ll need to assess the risks of using the material for the purposes you intend.

This digital collection was made possible by an agreement with the William S. Hein & Co, Inc. and is provided for personal, educational, and research use. Hein has not made its materials available for commercial purposes including bulk download, and the Library of Congress may impose restrictions on downloading material from this collection.2

For our genealogical research use, however, the collection is just dandy.

Thanks again to Glenn Berry for the alert — and to the Library of Congress (and William S. Hein & Co., Inc.) for putting the cases online.