Of all the things…

The sounds of their voices

This past Wednesday — Valentine’s Day 2018 — marked the 100th anniversary of the marriage of two people.

The Legal Genealogist‘s paternal grandparents, Hugo Ernst Geissler and Marie Margarethe Nuckel, were married at St. Jakobi Church in Bremen, Germany,1 after a civil ceremony at the City Registrar’s Office.2 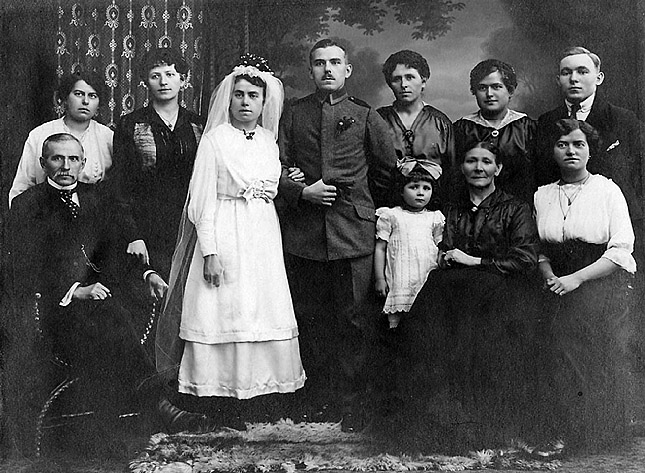 Their marriage and their later decision to emigrate to the United States — bringing my then three-year-old father along3 — certainly changed the course of my personal history in a big way.

But the reality of their lives also leaves a very big gap in my personal history.

Because I never met either of them.

They both were dead before I was born.

My grandfather was born 24 March 1891 in Bad Köstritz,4 a town then in the Principality of Reuß jüngerer Linie and now in the district of Greiz, in Thüringen, Germany. Its total population is fewer than 4000 people.5 He died 13 January 1945 in Chicago, Illinois, of cancer, at the age of 53.6

My grandmother was born 9 February 1891, in Bremen, Germany, the daughter of Carsten Hinrich Wilhelm Nuckel and Juliane Margarethe Smidt.7 She died of heart disease 12 January 1947 in Chicago, just one day short of two years to the day after her husband’s death.8

I grew up hearing only a handful of stories of either of them — more about my grandfather, who made people laugh9 than about my grandmother, who was remembered as stern.10

So much of what I know about them now I discovered only through my own genealogical research — like the fact that, for a brief time, just before the reality of the Great Depression really set in and took its toll, they ran a delicatessen in Chicago.11 And even that Marie had a brother who stayed in Germany whose name I never heard.12

And it’s that fact — that I never heard anything — that hits me the hardest.

I never heard the sounds of their voices.

I can sit here at my desk this morning and hear, in my mind, the sound of my mother’s father’s rumbling chuckle. The way his voice would take on that sly edge when he wanted to tease my grandmother. Even the way he cried with pain when he had an accident with the tractor and it rolled back over — and broke — his leg.

I can close my eyes and, in my mind, the sound of my mother’s mother’s laugh is just as clear. The way she would encourage us. The way she would scold. I can hear her telling one of my uncles to change his socks to match his shirt before he left on a big date. And I can hear the way she would talk to all the critters on the farm she called home for so many years… the many cats and dogs and the one exceedingly spoiled lap dog who kept her company in her last years.

But I have no clue what my father’s parents sounded like.

Whether he was a bass, baritone or tenor.

Whether she was alto or soprano.

Whether their voices were smooth or rough.

Whether they kept their German accents to the end of their lives.

Perhaps if we as genealogists do our job today, and record our own stories and the stories of the oldest living members of our families, this will not be the lament of those who come after us. They will know what those voices sounded like.

But there are no recordings anywhere of my father’s parents. No home movies. No YouTube videos. No cellphones to capture a snippet.

Of all the things to miss, here 100 years after they married and began the life together that would lead ultimately to me, my siblings and the generations to follow.

I wish I could hear the sounds of their voices.