From the state of confusion

If the stories are correct, he was born 282 years ago yesterday.

Or, if the other stories are correct, he was born 277 years ago yesterday.

And he was born in St. James’ Clerkenwell Parish, London, England. 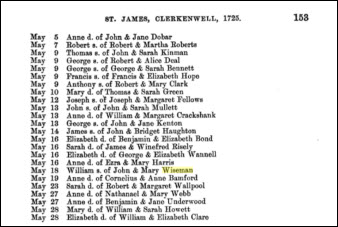 Except that the records of that parish have nobody by that name baptized after 1725, which would have been 293 years ago… plus there’s no birthdate on that baptism so no way to cross-check if it’s the same guy or not.

You have to love ancestors who lead you a merry chase like this.

And the stories of his origins are gonna drive us nuts.

First off, his widow, his second wife Lydia, filed estate papers for his estate in March 1823 in Morganton, the county seat of what was then Burke County.3 It’s a bit tough to be qualified as a widow and open a probate if the deceased isn’t deceased.

And the most direct evidence of a birth year is in a fragment of an old ledger that lists William as have been “born in the city of London, in St. James, Clerkenwell Parish, in the year of the Lord 1736, on February the second.”4

Except for that other little problem… the St. James, Clerkenwell Parish bit. You see, there are published registers for baptisms, marriages and burials for that parish going back as far as 1551 and as far forward as 1754.5 Guess who’s not listed in 1736 or 1741? The only William recorded, the son of John and Mary Wiseman, was baptized in 1725.6

He may have come to America as a stowaway.7 There is, of course, not a shred of documentation for that.

He may have married twice, or maybe three times. Reasonably well accepted (even if not terribly well documented) is his marriage to Mary Davenport around 17618 and his marriage to Lydia Bedford around 1798.9

And there are anywhere from 18-21 children ascribed to him by his various wives.10

We won’t even go into the fact that our William (a carpenter by trade, as far as we can tell) was accepted by the DAR years ago based on service that was almost undoubtedly provided by a very different William (a shoemaker).

Sigh… William’s history is a mess.

And looking to the various family trees… well… things don’t get any better.

All in one tree.

At least in theory.

Back to the drawing board…