To serve… or not

The research target she was closing in on lived in Tennessee in the 1840s and, she was sure, should have been on a militia list she found.

But his name wasn’t there. 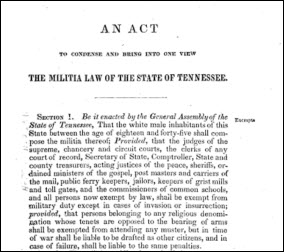 He’d been in the census in 1840, and a tax list around the same time… but not on that militia list.

And it’s The Legal Genealogist‘s mantra that gives us the answer to why he’s not on that list.

Not the law in general, but the law at the time and place where the record was created.

Tennessee passed a comprehensive statute on the 28th of January 1840, called “An Act to Condense and Bring into One View the Militia Law of the State of Tennessee.”1 And it tells us exactly who should — and who should not — have been on those 1840s era militia lists.

The law began with the general rule, that “the white male inhabitants of this State between the age of eighteen and forty-five shall compose the militia thereof”2

But then it went on to the key proviso that is going to impact so many researchers:

Provided, that the judges of the supreme, chancery and circuit courts, the clerks of any court of record, Secretary of State, Comptroller, State and county treasurers, acting justices of the peace, sheriffs, ordained ministers of the gospel, post masters and carriers of the mail, public ferry keepers, jailors, keepers of grist mills and toll gates, and the commissioners of common schools, and all persons now exempt by law, shall be exempt from military duty except in cases of invasion or insurrection…3

You can see from this one section that there are a lot of people who are not going to be subject to militia service.

Kenna needed to look at what her research subject did for a living.

It turned out, looking at the 1850 census, that he was a Methodist Episcopal preacher… an ordained minister of the gospel, in the words of the statute. And, as a result, exempt from militia service.