In 1850, fewer than 3,100 people were enumerated in the United States census with the surname of Battles — or any spelling variant of the name.

By 1940, there were still fewer than 22,000 people enumerated in the census with the surname Battles. 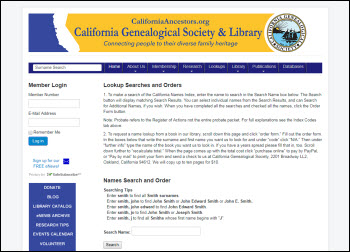 Since it’s a key surname for The Legal Genealogist, it’s a surname worth checking whenever and wherever a resource presents itself.

Which is why I’m going to be spending at least some of my precious California visiting time in the next few days at the California Genealogical Society and Library after speaking at the society’s all-day seminar tomorrow in Berkeley.

Because there’s this thing called the California Names Index maintained online by the California Genealogical Society that tells you whether a name appears in its reference resources. Those resources include:

• the original ledgers from the IOOF Crematorium in San Francisco, which operated from 1895 through 1911

• extractions from the government document List of Pensioners on the Roll, January 1, 1883, for all of California

• members of The Association of Territorial Pioneers of California

• 1890 Great Register of Voters for San Francisco City and County

You can do a name search on the California Genealogical Society website and it’ll tell you if the name comes up in one of those reference resources, and what kind of data it is. You can then order the info; up to 10 pages copied and sent is $10.

And when I did a search for the surname Battles, I got some intriguing hits.

Are any of these Battles folks related to my Battles family?

I have no idea.

But I’m sure going to try to find out.

Along with the 20-plus folks surnamed Wiseman.

Have you looked for your gone-to-California ancestor in the California Names Index?