Back to basics: YDNA

Y not give it a try!

Reader Frank Folwell Jr. would sure like to get some help with a part of his family tree.

“I have traced my Folwell line to colonial New Jersey,” he writes:

William Folwell of Salem, N.J., d. 1710 is most likely my immigrant ancestor.

There were two other male Folwells in N.J. in the late 1600s (colonial records). Family legend says the three were brothers (Nathan and Peter) who came from England. Nathan’s extensive family tree is well documented.

My question: If I have my DNA tested and if a known male descendant of Nathan did the same, could it prove that we are of the same family line? William and Nathan are eight or nine generations back.

Great question, and one The Legal Genealogist doesn’t see nearly enough with all the emphasis these days on those blankety-blank-blank percentages from autosomal DNA tests.1 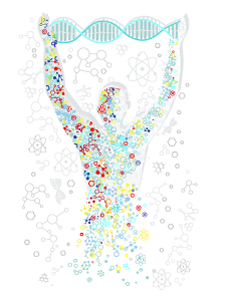 The kind of DNA Frank is talking about is YDNA — the DNA passed from father to son to son only through the direct male line. So it’s the type that is “used to explore a man’s patrilineal or direct father’s-line ancestry” because the Y chromosome, which only men have, “passes down virtually unchanged from father to son.”2 It’s one of the basic building blocks of genetic genealogy.

And yes, absolutely, if Frank and a known direct-male-line descendant of Nathan Folwell both took a YDNA test, and if they match at a high level, that can be definitive evidence that the two Folwell lines have a common root: some male somewhere back in time from which they both descend.

If the two took a 37-marker YDNA test and matched 37-for-37, the testing company that features YDNA testing, Family Tree DNA, would regard them as very tightly related: “A 37/37 match between two men who share a common surname (or variant) means they share a common male ancestor. Their relatedness is extremely close with the common ancestor predicted, 50% of the time, in five generations or less and over a 95% probability within eight generations. Very few people achieve this close level of a match. All confidence levels are well within the time frame that surnames were adopted in Western Europe.”3

If both tested at a higher level, say, 67 markers, a 67-for-67 marker match puts them into the very tightly related group: “A 67/67 match between two men who share a common surname (or variant) means they share a common male ancestor within the genealogical time frame. Their relatedness is extremely close. All confidence levels are well within the time frame that surnames were adopted in Western Europe with the common ancestor predicted, 50% of the time, in three generations or less and with a 90% probability within five generations. Very few people achieve this close level of a match.”5

So YDNA can definitely provide evidence of a relationship.

But, of course, there’s a hitch.

The first is, if they do match, the test can’t tell the two men exactly how they’re related, or who the common ancestor is. It can tell them they are both descended from one man, somewhere back in time, but — by itself, without paper trail evidence — can’t put a name on that man. They could both be descended from the man who fathered William and Nathan and Peter. Or from the grandfather. Or the great grandfather. Or from William. Or from Nathan. Or from Peter. Or from any male in the same direct male line of descent.

So it would prove they were both Folwells from a common Folwell ancestor — but won’t by itself prove who that Folwell was.

The second is, if they don’t match, it won’t tell them why they don’t match. It could be that there’s more than one Folwell line here: two groups of immigrants reaching America around the same time with the same name, but not the same origins in England.

Or it could be there’s an unrecorded adoption somewhere in the male line for one of the two that breaks the DNA chain — a step-son could have taken his step-father’s name early on and carried forward the Folwell name but not the Folwell YDNA.

And there could even be a very recent case of … um … let’s just call it misattributed paternity, shall we?

Any of those would be possible as theories, and without testing more than just those two men, none of them could be ruled out.

As long as everybody understands what YDNA can — and can’t — show, it’s a great way to shed light on family history.

Yes, YDNA is going back to basics — and that can be a very good thing.