All over the map

Take a careful look at the chart below showing the ethnicity estimates of four people based on their autosomal DNA testing. All four were tested at the same company, all four analyzed against the same reference populations.

You can click on the image and look at it in a bigger form to study it better. 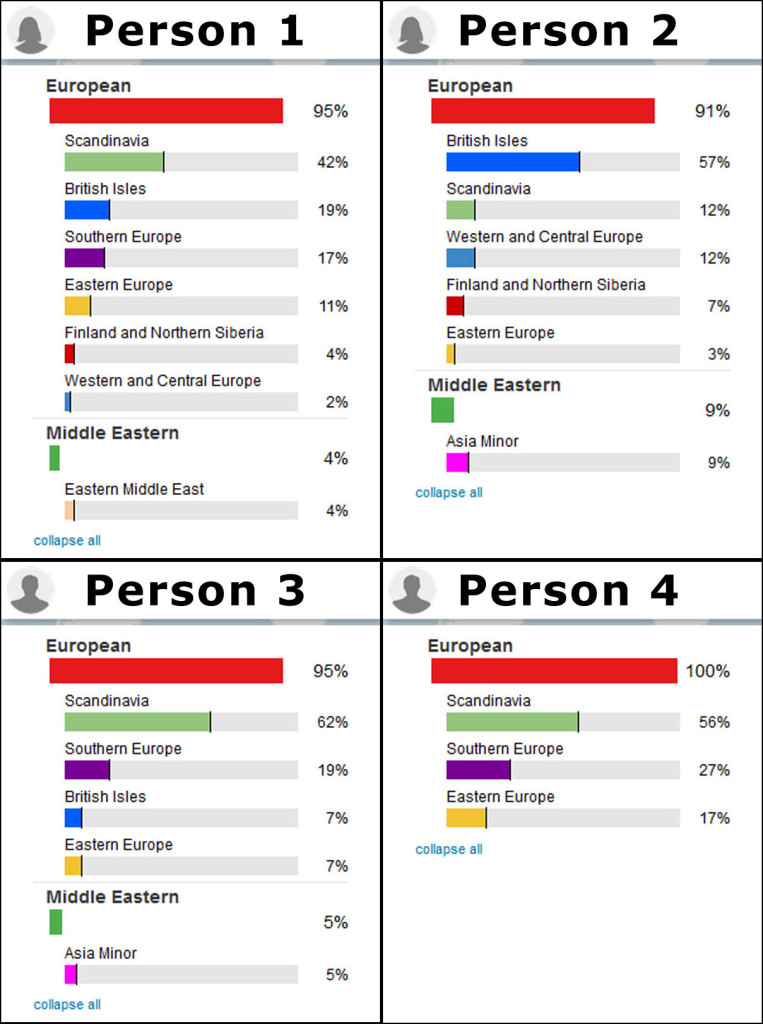 Maybe it will help you to see it in a tabular form.

Now ask yourself: what’s the relationship (if any) among these four people?

If you’re thinking maybe they’re not related at all (look at the wide variations across the population reference groups), or maybe person 2 isn’t related to the others (look at that big British Isles component compared to the others), well, that’s exactly why The Legal Genealogist keeps warning that you can’t take these ethnicity estimates as more than an interesting conversation starter.1

Because all four of these people are full blood siblings, definitively established by DNA testing.

These happen to be my own results and those of two of my brothers and one of my sisters. (Stand by for more when I twist a few more arms…)

Now we’ve seen this sort of thing before. I posted about the wide variations among my aunts and uncles who’d tested.2 It’s simply not possible to identify our exact ethnic origins based on our DNA in any way that’s really reliable below the continental level (Europe versus Africa versus Asia, for example).

Let me repeat, one more time, what the limits are of these estimates: these estimates take the DNA of living people — us, the test takers — and compare it to the DNA of other living people — people whose parents and grandparents and, sometimes, even great grandparents all come from one geographic area. Then they try to extrapolate backwards into time. Nobody is out there running around, digging up 500- or 1,000-year-old bones, extracting DNA for us to compare our own DNA to.

So coming up with these percentages in these tests requires this fundamental assumption: that the DNA of the reference populations — those groups whose parents, grandparents, great grandparents and more all come from the same area — is likely to reflect what we might see if we could test the DNA of people who lived in that area hundreds and thousands of years ago.

In other words, these percentages are:

• estimates based on comparisons not to actual historical populations but rather to small groups of people living today, and

• estimates based purely on the statistical odds that those small groups tell us something meaningful about past populations.

It’s fun stuff, for sure.

But they’re called estimates for a reason…

Because I’m person 2 in this image and this chart. And though I don’t look much like the others in terms of ethnicity estimates the other three really are my full blood siblings.