The Legal Genealogist has said it before and will (I devoutly hope) say it again and again:

I especially love cousins who are willing to donate just that little bit of themselves that allows an analysis of their DNA against the rest of the family’s DNA.

Because every so often, the results say just what you hope they’ll say. 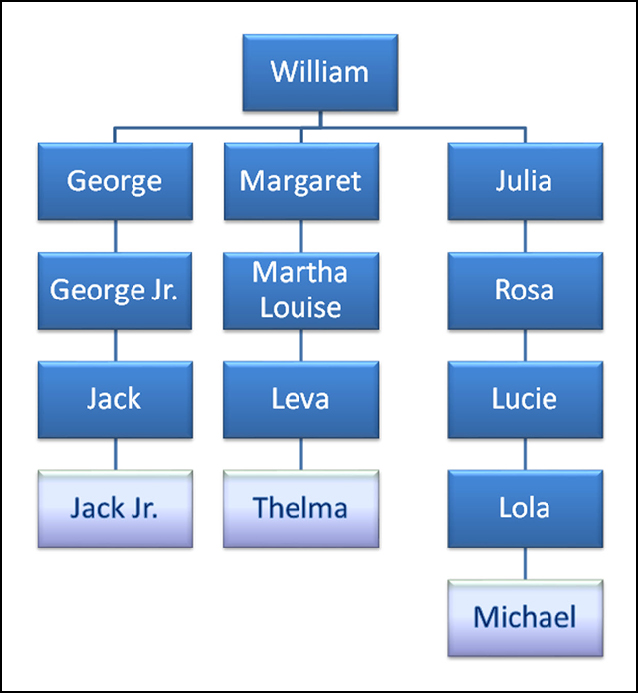 This family is one that I’ve fought with for years. In large part, it’s because of what is at least a single and (more likely) a double out-of-wedlock situation. In a county where the courthouse burned. Twice.

We were pretty sure of Margaret’s maiden name, but, with those courthouse fires, documentary proof is hard to come by. We do have oral history passed down to Margaret’s great granddaughter, my grandmother;4 and the death certificate of her son William.5

We could add to that the fact that there was only one Battles family in Cherokee County, Alabama, at any time that could have included Margaret, and that’s the family of William Battles, who was enumerated in Cherokee County in 1840,6 1850,7 1860,8 and 1870.9

In the last few months, we’ve added some amazing bits and pieces, most particularly the fantastic DNA results of a cousin, Jack, who descends from a George Battles, whom we have long believed to be Margaret’s brother, and whose DNA results so strongly match everyone in my family that he should match that it leaves no doubt about George and Margaret being siblings.10

But even with that we have been up against one final question: who was the mother of the many Battles children? You see, William was married twice. His first marriage, to Kiziah Wright, resulted in a messy suit she brought against him for divorce that was finally dismissed in 1829, apparently when Kiziah died.11 His second wife was Ann Jacobs. They were married on Christmas Day 1829, and showed up on the 1830 census with — count ‘em — five children.12

So… how to prove whether Kiziah or Ann was the mother?

We needed a documented direct female-line descendant of Ann.

And a California man named Michael has stepped into that gap. He descends in an unbroken female line from Julia Battles, the middle of three female children enumerated with William and Ann in the 1850 census.

His mitochondrial DNA results will give us the final answer we need: if he matches me and my maternal cousin who’s tested, then we know that Ann was the mother of both Julia and Margaret. If he doesn’t match us, then the older children may well have been Kiziah’s children and not Ann’s.

And … sigh … no, those results aren’t in yet. My fingernail marks from climbing the walls are evidence of that.

But his autosomal results came in this week.

You can see from the chart above that we really really really needed Michael to match Jack and Thelma. At that level, he should be a third cousin once removed to both of them. The odds of a match at that level are good, but not guaranteed.

All I could do was cross my fingers that he shared enough DNA in common with these cousins to show up as a match.

Family Tree DNA still reports, as to the mitochondrial results, that “This test is currently on order and matching will be possible when results come back.”