DNA and Jack the Ripper

You have to love it.

Even the possibility that DNA could solve the coldest of cold cases just has to make a genetic genealogist smile.

And though there are a fair number of as-yet-unanswered question, you just have to love even the idea that we might now know who Jack the Ripper was … thanks to DNA. 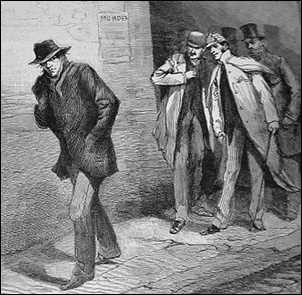 Jack the Ripper, you recall, is the nickname given to a serial killer who murdered at least five women in London’s Whitechapel area in 1888. As many as 11 other murders, up to 1891, were thought to be the work of the same killer, but only five in 1888 were considered certain to be his/her work.1

The reports over the weekend that the case file might now be marked “closed” come in advance of the publication of a book by a man who is a self-described “armchair detective.”

British businessman Russell Edwards, whose book Naming Jack The Ripper is about to be released for sale, wrote an article yesterday for the London newspaper, The Daily Mail, in which he claims that DNA has identified the killer: “Aaron Kosminski, a Polish Jew who had fled to London with his family, escaping the Russian pogroms, in the early 1880s.”2

Edwards said that he acquired a blood-stained shawl that was supposed to have been found near the body of one of the certain victims. Reportedly, the shawl was originally in the possession of one of the investigating officers and was passed down through his family. It was loaned to Scotland Yard’s crime museum but not displayed because of questions about its provenance. After the family reclaimed the shawl in 2001, it was put up for auction and purchased by Edwards.3

The author noted that he spoke to a representative of the Crime Museum who said the chief investigator on the Jack the Ripper case always believed that Kosminski was the killer. There wasn’t enough evidence to convict him, but he was kept under police surveillance until he was committed to a mental institution where he spent the rest of his life.4

With the shawl, Edwards wrote, he needed four things to come up with an answer: (a) adequate DNA samples from the shawl; (b) a descendant of the victim whose blood was believed to be on the shawl; (c) a descendant of a member of the Kosminski family — the suspect left no descendants; and (d) a scientist who could do all the work and analysis.

The scientist he worked with was Dr. Jari Louhelainen, now associated with Liverpool John Moores University: “a Senior Lecturer in Molecular Biology at LJMU, as well as Associate Professor of Biochemistry at University of Helsinki, one of the world’s top universities. He has two major lines of research – mammalian/medical genetics and forensics.”5 His genetic credentials are impressive.

Edwards said Louhelainen was able to extract DNA from two different people from the shawl. The scientist also tested DNA samples from two people: a known descendant of the victim, whose identity has been widely reported in the media and was featured in a documentary on Jack the Ripper; and a descendant of a member of the Kosminski family.6

And here, from a genetic genealogy point, is where we run into the snag. Edwards wrote: “Eventually, we tracked down a young woman whose identity I am protecting – a British descendant of Kosminski’s sister, Matilda, who would share his mitochondrial DNA.”7

Now he reports that the tests of this individual against the other DNA from the shawl is “a perfect match.” But without the identity of that person we’re left to take the author’s word for it. And the author has a vested interest in being able to say he has the answer to this 126-year-old mystery.

Now it’s also true that Louhelainen himself wrote for the newspaper that he was satisfied that “we have established, as far as we possibly can, that Aaron Kosminski is the culprit.” And, he said, the extracted DNA was “of a type known as the haplogroup T1a1, common in people of Russian Jewish ethnicity. I was even able to establish that he had dark hair.”8

Is that enough, without knowing the genealogy of the woman tested?

Not for a genealogist, of course, but…

Image: “With the Vigilance Committee in the East End: A Suspicious Character” from The Illustrated London News, 13 October 1888, via Wikimedia Commons