Precursor to the Magistrate

On the fifth day of June, 1891, J.D. Shaw appeared in front of a judicial officer in the Western District of Arkansas and swore out a complaint. 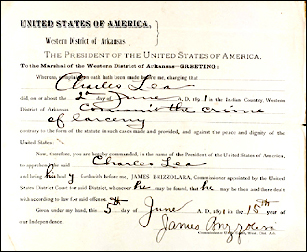 “I do solemnly swear and believe from reliable information in my possession,” he said, “that Chas Lea a white man did, in the Choctaw Nation, Indian County, … on or about the 2nd day of June 1891, feloniously steal, take and carry away from the lawful possession of W A Ledford one horse of the value of one hundred DOLLARS, against the peace and dignity of the United States…”1

As a result of the complaint, an arrest warrant — a writ of capias2 — was issued for Lea.

And the man who took the complaint and issued the arrest warrant was one James Brizzolara, born in Virginia and appointed, in Arkansas, as a United States Commissioner for the Fort Smith Division.3

Officers appointed by and attached to the circuit courts of the United States, performing functions partly ministerial and partly judicial. To a certain extent they represent the judge in his absence. In the examination of persons arrested for violations of the laws of the United States they have the powers of committing magistrates. They also take bail, recognizances, affidavits, etc., and hear preliminary proceedings for foreign extradition.4

The history of the job goes back to the early days of the Republic. In the Judiciary Act of 1793, the circuit courts and the district courts of Maine and Kentucky were allowed to appoint “discreet persons learned in the law” to take bail in federal criminal cases.5

That authority was expanded in 1812 to allow the circuit courts to appoint “such and so many discreet persons, in different parts of the district, as the court shall deem necessary, to take acknowledgments of bail and affidavits.”6

It wasn’t until 1817 that the folks so appointed were first called Commissioners by the law. In a statute passed that year, the term was used and the commissioners’ authority was expanded again to include the taking of depositions for later use at a civil trial.7

Over the years, more and more authority was given to commissioners, to act particularly in the enforcement of specific laws, such as:

In 1896, Congress abolished the old commissioner system and created a new official position of United States Commissioner, with the appointments to the post made by the district courts, not the circuit courts.11 Fees to be charged by these Commissioners for the work done were set by law.12

So these officers were known as United States Commissioners, and you’ll see them referenced that way, in most of the older judicial records right up until 1968.

In the mid-1960s members of the congressional judiciary committees and judges on the Judicial Conference of the United States recognized the need for revisions to the commissioner system. Commissioners were still paid by a fee system, the appointment process varied from court to court, and there were no uniform criteria for selection. Members of Congress and federal judges also wanted to relieve the congestion of the federal court dockets by expanding the judicial responsibilities of the commissioners.13

The result was the passage of the Federal Magistrates Act of 1968, changing the name and greatly expanding the role of these federal officers.14 Other statutes have added to the magistrates’ duties, and the Judicial Improvements Act of 1990 changed their official title to United States Magistrate Judge.15

So when Commissioner James Brizzolara acted in 1891, he was acting under the authority of the Circuit Court. And he had a solid background to hold the job. He’d been the city attorney and the mayor of Fort Smith. A Union veteran of the Civil War, he’d served as chief assistant United States Attorney for the Western District of Arkansas until he resigned in 1878 to take the appointment as United States Commissioner. And he held that title until Congress abolished the job.16

And what happened to Lea?

He was promptly arrested, pleaded guilty to the charge and was bound by Commissioner Brizzolara over to the jail to await further action.17

And further the file sayeth not.