A matter of timing

How different can the law be?

So… within minutes of each other two comments arrived in The Legal Genealogist‘s email box yesterday that underscore a critical point when using the law in genealogy. 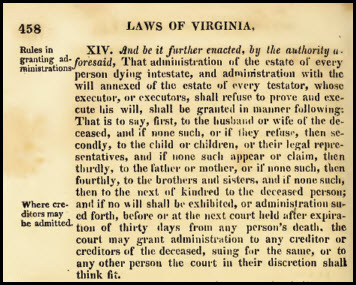 The first was from reader Jeffrey D., a Virginia resident, who focused on the comment in the blog post that we always need to look at the specific statutes in effect at the time and in the place when the record we’re looking at was created. “How different,” he asked, “could be the law possibly be in one place with one common heritage and history like Virginia?”

And the second, as if anticipating Jeffrey’s question, was from Barbara Vines Little, CG, FNGS, FVGS, and Virginia expert extraordinaire. She reminded me that the colonial Virginia Legislature had also spoken on the subject of priorities for estate administrators.

In a 1748 statute, the colonial House of Burgesses directed:

Now let’s extend our legal research just a little. Let’s come forward in time to the first codification of Virginia law. (Codification, by definition, is the “process of collecting and arranging the laws of a country or state into a code, i.e., into a complete system of positive law, scientifically ordered, and promulgated by legislative authority.”3)

In 1819, Virginia’s legislature directed that “there shall be published an edition of the laws of this Commonwealth,”4 and set out exactly what was to be included. Among the contents was a chapter on Wills, intestacy and distributions, and in that chapter a revised rule on administration priority:

The general court, and the several courts, respectively, shall have … jurisdiction to hear and determine the right of administration of the estates of persons dying intestate … and shall grant certificates for obtaining such administration, to the representatives who apply for the same ; preferring first the husband or wife, and then such others as are next entitled to distribution, or one or more of them, as the court shall judge will best manage and improve the estate.5

And let’s come forward just once more, to the 1849 codification, in which the rule was:

Administration shall be granted to the distributees who apply therefor ; preferring first the husband or wife, and then such of the others entitled to distribution as the court shall see fit.6

So we now have the law on who should be given priority as administrator of an estate during a period of just a little more 100 years, from 1748 to 1849. And we can see just how different the law can be:

• All of the statutes gave first priority to the surviving spouse.

• The 1748 explicitly, and the 1785 and 1819 statutes implicitly, gave next priority to the children of the deceased.

• In 1748, a legal representative of a child had the same priority as the child himself. So the executor or administrator of a deceased child’s estate was in the mix. That preference was gone from the law by 1785.

• In 1785, the descendants of a potential administrator were expressly added to the mix, so a grandchild or great grandchild would be considered before a parent or sibling, and a niece or nephew before a cousin. That was likely the practice under the 1748 law — but it wasn’t spelled out earlier.

• In 1819, the law started subtly changing to give the courts more discretion to choose among potential administrators. The law still told the courts to look at “such others as are next entitled” but also gave the courts the power to “judge” which of those “will best manage and improve the estate.”

• By 1849, the courts had broad discretion if there wasn’t a surviving spouse willing and able to serve. The law allowed judges to choose “such of the others entitled to distribution as the court shall see fit.”

What this means for us as genealogists is that we need to be careful in drawing conclusions about relationships between the deceased person and the administrator and always think about the law at the time and in the place when the record was created.

Because the law can be very different… even in one place with one history and one heritage.