So you remember that old commercial where a margarine company gave Mother Nature a taste of its product and she thought it was butter. The tagline of all the commercials — just before something bad happened — was: “It’s not nice to fool Mother Nature.” 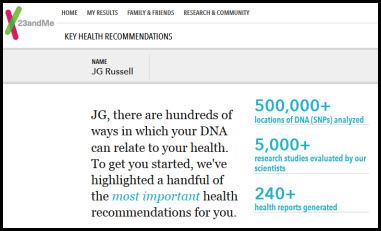 Yesterday, news reports revealed that the DNA testing company 23andMe got the 21st-century regulatory version of that tagline: it’s not nice to fool with the FDA.

On Friday of last week, the Food and Drug Administration sent what’s called a warning letter to 23andMe, laying out a litany of complaints it had with 23andMe with respect to the health claims made for its DNA test, called the Personal Genome Service, and giving it 15 days to stop marketing the service.1

This test — let’s call it the PGS for short — has long been regarded as an “medical device” by the FDA. That’s a statutorily-defined term meaning “an instrument, apparatus, implement, machine, contrivance, implant, in vitro reagent, or other similar or related article, including any component, part, or accessory, which is-… intended for use in the diagnosis of disease or other conditions, or in the cure, mitigation, treatment, or prevention of disease, in man or other animals.”2

Now let’s stop here for a minute. The Legal Genealogist wants to be crystal clear about this. The FDA doesn’t care a whit about purely genetic genealogy. It’s not interested in the Family Finder test or the YDNA or mtDNA tests offered by Family Tree DNA. It doesn’t care how much Scandinavian ancestry shows up in my test report from AncestryDNA. It doesn’t even care about my genealogy results at 23andMe.

It only cares about genetic tests that provide health data.

The director of the FDA Center for Devices and Radiological Health put it this way more than three years ago:

A genetic test is only subject to FDA oversight if it is a medical device; that is, if it is intended for use in the diagnosis of disease or other conditions, or in the cure, mitigation, treatment, or prevention of disease. … (A) test to determine ancestry is not a device.3

I want to repeat that:

“…(A) test to determine ancestry is not a device.”

So why is the FDA going after 23andMe? Because of statements like this: “Testing with 23andMe can tell you hundreds of things about your health.”4 Or the old headline from its website: “23andMe can help you manage risk and make informed decisions.”5 And like the one illustrating this post that I screen-captured from my own 23andMe results this morning, telling me about “health recommendations” the company had for me.

And because 23andMe is telling folks like me that “if you take a blood thinner called warfarin (Coumadin®) you may require a lower dose.”6

Now understand as well that, as of last year, 23andMe wasn’t fighting the FDA on this issue. In 2012, 23andMe filed for FDA approval of the PGS test. In doing so, CEO and co-founder Anne Wojcicki said: “23andMe is working proactively with the FDA to ensure the industry delivers high quality information that consumers can trust.” And, she said at that time, “FDA clearance is an important step on the path towards getting genetic information integrated with routine medical care.”7

So… what changed? The FDA’s letter to Wojcicki provides a big clue. It noted:

In your letter dated January 9, 2013, you stated that the firm is “completing the additional analytical and clinical validations for the tests that have been submitted” and is “planning extensive labeling studies that will take several months to complete.” Thus, months after you submitted your (applications) and more than 5 years after you began marketing, you still had not completed some of the studies and had not even started other studies necessary to support a marketing submission for the PGS. It is now eleven months later, and you have yet to provide FDA with any new information about these tests. You … did not provide the additional information we requested necessary to complete review …, and FDA has not received any communication from 23andMe since May. Instead, we have become aware that you have initiated new marketing campaigns, including television commercials that, together with an increasing list of indications, show that you plan to expand the PGS’s uses and consumer base without obtaining marketing authorization from FDA.8

Again: “FDA has not received any communication from 23andMe since May.”

So let’s see what we have here. A company that agrees that “FDA clearance is an important step,” that actually files applications for FDA approval, that gets input from FDA as to what FDA wants — and then — at least according to the FDA — turns around and ignores the FDA for six months.

Which kind of explains the piece written yesterday by Matthew Herper of Forbes Magazine, where he noted: “Either 23andMe is deliberately trying to force a battle with the FDA, which I think would potentially win points for the movement the company represents but kill the company itself, or it is simply guilty of the single dumbest regulatory strategy I have seen in 13 years of covering the Food and Drug Administration.”9

23andMe’s response to the FDA letter was, in effect, a mea culpa — an admission that it dropped the ball:

We have received the warning letter from the Food and Drug Administration. We recognize that we have not met the FDA’s expectations regarding timeline and communication regarding our submission. Our relationship with the FDA is extremely important to us and we are committed to fully engaging with them to address their concerns.10

First and foremost, it isn’t likely that the FDA is actually going to shut down 23andMe in the next 15 days. The letter appears to have done exactly what I expect the FDA intended it to do: get the attention of the decision-makers at 23andMe. In the usual case, a company that’s cooperating with the FDA is allowed to continue operations and there’s no reason to think that won’t be the case here.

Second, the FDA isn’t going to start regulating purely genetic genealogy: the ancestry side of the 23andMe test results are not at issue in the FDA letter, though the 23andMe business model is such that it isn’t likely it could stay afloat if it had to rely only on its genealogy customers.

Because of the 23andMe business model, however, it’s not a bad idea for its genealogy customers to make sure they have all their data — match lists, raw data and more — just in case 23andMe doesn’t patch things up with the FDA or doesn’t patch them up in time to prevent some service outage. Blogger Roberta Estes of DNAeXplained has some good suggestions on that score.11

But so… what does this mean for us who — as people — have tested with 23andMe and who may be interested in those health results?

On that side, first and foremost, it’s clear that no matter what happens between the FDA and 23andMe, it isn’t going to stop the flood of health-related DNA data or its use by individuals to manage their own health issues.12

What it may do, however, is call attention to the very real potential for a disconnect between specific genetic results and specific health risks. That isn’t just a hypothetical potential. Just yesterday, Lukas Hartmann, a 23andMe user from Germany and co-founder of a German tech company, posted his own experience with being told, based on his 23andMe results, that he had a genetic mutation that usually meant the person would develop an eventually-fatal muscle dystrophy.13

His story had a personal happy ending — he didn’t have the exact mutation that causes that dystrophy but rather two separate mutations on two different genes, and that combination doesn’t cause the dystrophy.

And while he said he was “very much aware of the fact that 23andme doesn’t claim to make any diagnoses,” he posted his account because: “My story serves to illustrate the psychological effects that a health report can nevertheless have, ultimately driving me to spend some nights trying to disprove the report in question.”14

Which underscores the one thing the FDA kept saying in its letter to 23andMe: “serious concerns are raised if test results are not adequately understood by patients or if incorrect test results are reported.”

Where do I come out on this issue? Pretty much where Forbes‘ Matthew Herper does:

We need something like 23andMe to help develop systems for letting people know how to deal with this genetic information, and for creating a world where people can actually start to deal with lots of health data. But outside of a crowd of libertarians and genoscenti, the company does not have the political support it needs for a fight against the FDA. And none of its high-minded ideals release it from the requirement the FDA wants to enforce: that a medical device has to work. I hope 23andMe and FDA can find a way to thread this needle, but this isn’t a promising start.15

I’m sitting here with my popcorn, waiting for the next installment of threading the needle, FDA-style.