For whom the Bell tolls

She had three names that we knew of — until yesterday, that is. 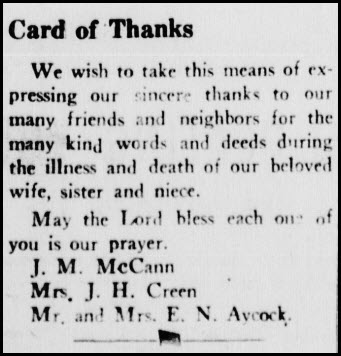 The birthday given on her death certificate — the 5th of July — is probably correct, though the 1900 census says she was born in August.2

When she died in 1944, however, she died as Margaret Arby McCann, wife of J. M. McCann of Aspermont, Stonewall County.8 Even though we haven’t yet found a marriage record for Arby and J. M. McCann, we know that’s our Arby for a lot of reasons, particularly:

• Her parents are identified on her death certificate as G.W. Cottrell and Louisa Baker.9

But where was she — and who was she — in 1930? Poking around that Aspermont newspaper yesterday — it’s now available online — using all the family names as search terms provided a clue to yet another name.

The newspaper reported in June 1931 that “Mrs. Eugene Aycock of Levelland Mrs. J.C. Holley of Lubbock visited with relatives here last week. Mrs. Green who had been with her sister Mrs. A. Bell for the past few weeks returned home with them.”15

Bell? Who the heck was Bell?

I haven’t found a marriage record for the Bells yet, nor a death record for Jim Bell, but one thing’s for sure…

The Bell tolls for Arby… and we’re hot on her trail.