So… do you remember those Lipton soup commercials? The ones where the kids kept asking if it was “soup yet”? 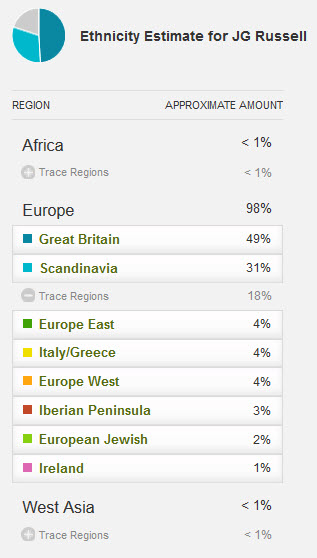 That’s the question genealogists seem to be asking today about what are called ethnicity estimates: those percentages we see in our autosomal DNA results that suggest how much of our autosomal DNA we’ve inherited from ancestors who lived in different places around the world 500 or 1000 (or even more) years ago.

AncestryDNA has rolled out its new ethnicity estimates to its full database over the past month and — more than anything else — the results seem to be underscoring the reasons why The Legal Genealogist has one thing to say about these deep ancestral percentages:

They’re cocktail party conversation pieces — and little more. The science just isn’t there yet to back them up.

And because of the fact that the only way to get these percentages is by comparing folks like you and me — alive today — to the test results of other people who are alive today (and not to the actual DNA of our ancient ancestors!!), the science may never really be there.

Just as a few examples, three of the folks who regularly blog about using DNA for genealogy have been left scratching our heads, and more have raised questions about the reference populations chosen to represent the deep ancestral populations — which give us these percentages when our own results are compared to those reference populations.

• Debbie Cruwys Kennett of Cruwys news, who is British and whose ancestors have lived exclusively in Great Britain for generations, has substantially less British ancestry showing in her results than I do and, indeed, than many Americans do, despite the fact that our documented ancestry has far fewer British roots.1

• Roberta Estes of DNAeXplained saw her results go from 80% British Isles to 6% (4% Great Britain and 2% Irish), and from 12% Scandinavian to 10%. “Apparently Ancestry’s V1 was worse than we thought, given that my 80% majority ancestry turned into 6 and my 0% western Europe turned into 79%. Neither of these are correct,” she wrote. “Ancestry’s V2 seems to be somewhat better, but raises the same types of questions about the results.”2

• And in my own case, my well-documented Western European paternal side (all German, back hundreds of years) almost completely disappeared in my results — from 43% Central European in the V1 estimates to 4% Europe West in the updated V2 estimates — and the amount of Scandinavian (considered well over-estimated in V1) actually doubled — from 15% in V1 to 31% in V2.3

Angie Bush, another genetic genealogist, commented on the DNAeXplained blog that “there is still significant improvement to be made in distinguishing Western European and British Isles admixture. This still seems to be quite problematic for many, including me. It seems that Ancestry has traded their v1 Scandinavian/British Isles problem for a new British Isles/Western Europe problem.”4

Now the fact is, what we’re seeing isn’t anybody’s fault. AncestryDNA is using the best available scientific information that it has to analyze the data. So is 23andMe. So are all the companies that do this sort of analysis.

The problem is, it’s all a numbers game based on one fundamental assumption: that people who live in an area today (say, modern Englishmen and -women) and who have all four of their grandparents born in that area are typical of the genetic signature of that population generations ago.

The statisticians will tell you that these sample sizes are adequate to the task.

The results suggest that, as the old saying goes, there are three kinds of lies.