A short life, not to be forgotten

One hundred and seventy years ago yesterday should have been a joyous day for my Nuckel third great grandparents. 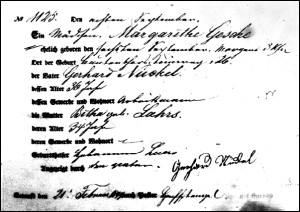 Just about 3 o’clock in the morning on 6 September 1843, at home at Buntenthorsteinweg Nr. 26, in the City of Bremen, Germany, Gerhard Nuckel and his wife Beta (Lahrs) Nuckel welcomed their fifth child and third daughter, Margarethe Gesche Nuckel, into this world.1

Her birth was duly registered by her father on the 8th of September, who told the registrar that he was 36 and Beta was 34 and that they’d had the help of a midwife named Luers for the home birth.2

That same birth registration form was where, sometime later, it was duly recorded that Margarethe was baptized on the 21st of February 1844. The pastor’s name is unfamiliar;3 her siblings had all been baptized by Pastor Iken, pastor at the Bremen Neustadt Church of St. Paul’s.

And just one year later, on the 25th of February 1845, when she was just 17 months old, Margarethe Gesche Nuckel died. And it was, again, her father who had the duty of reporting the death to the Civil Registration Office.4

Gerhard and Beta were working class folks. He was recorded as a laborer on every official document of his life, such as his marriage record,5 and the birth records of his children.6 Particularly among working folks, child mortality in this busy city was high. In all of Germany, infant mortality as late as the 1870s ran as high as 30 percent, and the odds of death continued to be high between ages one and five.7

But Gerhard and Beta had been lucky. All four of their first children had survived those terrible early risks. When Margarethe was born, Anna Adelheid was 10; Gerd was seven; my second great grandfather Johann was five; and Betha (or Beta) was almost three. in fact, all four would live to adulthood and marry.8

You have to believe they thought they would beat the odds with this little girl, too. That losing her was a sucker punch right in the heart.

Was she merry and bright? An active handful until some final illness stole her strength away? Was she blonde or brown-haired? Blue-eyed or brown? Was she doted on by her older brothers and sisters?

Did she have a streak of mischief, this toddler in that busy household? Was she plump or skinny? What toys did she have, perhaps passed down from her older siblings, handmade by her mother or father?

Was she an early walker, or still wanting to crawl more than walk? What words was she saying? Was she saying “mama” and “dada” — or whatever was the equivalent for a German baby of that time?

And it breaks your heart, doesn’t it, to wonder if those were the last words she ever said as she slipped away and out of our family’s history so early in her life…