The challenge of Charles

It’s hard enough to chase family members down the genealogical rabbit holes of the past. Records losses and the ravages of time are bad enough. But when each generation is unkind enough to name members of the next generation with the same name, things can get worse awfully fast. Add a common surname and watch out.

So falling into the same name-same man trap is something every genealogist does at some point, The Legal Genealogist being no exception to that rule. 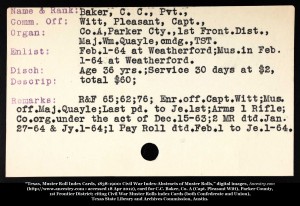 And that Charles Baker had a nephew, my third great granduncle Charles Baker, youngest son of David and Dorothy (Wiseman) Baker, born in 1806 in Burke County, North Carolina.2

And that Charles Baker had a nephew, my second great granduncle Charles Baker, youngest son of Martin and Elizabeth (Buchanan) Baker, born 12 July 1828 in North Carolina.3

And that Charles Baker — brother to my 2nd great grandmother Martha Louisa (Baker) Cottrell — had seemingly disappeared into the mists of time. I couldn’t find him in the records readily available online at the time I started my family research, so I put him aside for another day.

And I had to get slapped upside the head with it just this past week to see it.

You remember back when I was so excited to learn that my 2nd great grandfather (and chief genealogical nemesis) George W. Cottrell had been a Texas Ranger?4 I’d come across a set of images of carded records of those who’d served in a Frontier Regiment in Texas during the Civil War who qualified as Texas Rangers.

Well, one of those cards — the one you see here — was that of a C.C. Baker. And I even thought at the time that might be this youngest Charles… and I let it go at that.

Take a look at that card again. Take a close look. See anything that maybe might have given me a clue that I did have the right guy?

Duh. All those records of a Charles C. Baker in Parker County, Texas, where this whole branch of the family settled? Um… er… uh… we have two Charles C. Bakers there. How do I know? Because I spent hours backtracking to take another closer look.

And when I took that closer look, there’s evidence of Charles the younger as Charles C. Baker (or C.C. Baker) all over the place. My 3rd great grandfather Martin Baker had gone from North Carolina to Louisa County, Iowa, by 1852.5 And there, in those Iowa records? Charles C. Baker, born 1828, in North Carolina.6

And those Iowa records told me more: that Charles had a son, W.H. Baker, born in Iowa in 1854. And guess who shows up by 1880 in the U.S. census in Young County, Texas, where tons of Baker relatives settled? William H. Baker, born in 1854 in Iowa.7 And that William had a daughter Ida who married George Cherryhomes and…

Okay. So I missed the clues earlier that could have led me to a whole line of cousins who, I hope, will help us all nail down Charles the younger. I’d prefer some chocolate in my humble pie rather than crow, please…

And I’m hot on the trail now… so if you descend from George and Ida (Baker) Cherryhomes/Cherryholmes of Young County, Texas. Drop me a line. There’s a DNA test I’d like to chat with you about…