Love in the December air

Love is definitely in the December air in The Legal Genealogist‘s family tree. And today and next Saturday, it’s going to be my distinct pleasure to introduce you to some of the members of my family who helped me reach that conclusion.

Today, I get to highlight two of my family’s December brides.

First and foremost, today, I get to say Happy Golden Anniversary to my cousin Mary Ann (Hendrix) Thurmond and her husband Tom Thurmond.

Fifty years ago today, Mary Ann walked down the aisle to be joined for better or for worse, for richer and for poorer, in sickness and in health, with the man of her dreams, and surely nothing has put their relationship asunder. I am absolutely tickled to be able to wish her and Tom the happiest of 50th anniversaries. In this day and age, it’s a joy to see the love and the commitment between these two lasting through all these years.

Mary Ann is not just my cousin, on my maternal grandmother’s Robertson side (her grandmother Mary Isabella (Robertson) Hendrix was the older sister of my great grandfather Jasper Carlton Robertson). She’s also a fellow genealogist. And we’ve shared many a “did you see that in the census” and “what does this pension record say” moment over the years.

and wasn’t she a beautiful bride?

And some 65 years earlier, love was also in the air in my maternal grandfather’s Cottrell family. The year was 1897. The place, Iowa Park, Wichita County, Texas.

My grandfather’s older sister, Addie Lee Cottrell, was born in Bluegrove, Clay County, Texas, on 31 March 1881.1 She was the fourth child and third daughter of my great grandparents Martin Gilbert Cottrell and Martha (Johnson) Cottrell.2 The family moved to Iowa Park in 1890.3

There Addie went to school, got into mischief… and met Charley Emmett Harris, called Emmett. Emmett was more than seven years older than Addie, a laborer born either in Texas (if you believe the census records)4 or what became Oklahoma (if you believe his death certificate).5

Now Addie had a reputation in the family of being gentle but firm, a woman who wanted to have things her way. Some — not me! — might use the word stubborn. She clearly knew what she wanted in a man, and Emmett was that man.

She was not yet 17 years old that December day in 1897 when, somehow, she wore her mother down with her nagging. And, 115 years ago today, Addie secured her mother’s signature on a letter giving consent6 to the marriage:

That allowed the clerk of Wichita County to issue a marriage license for her and Emmett’s marriage.7 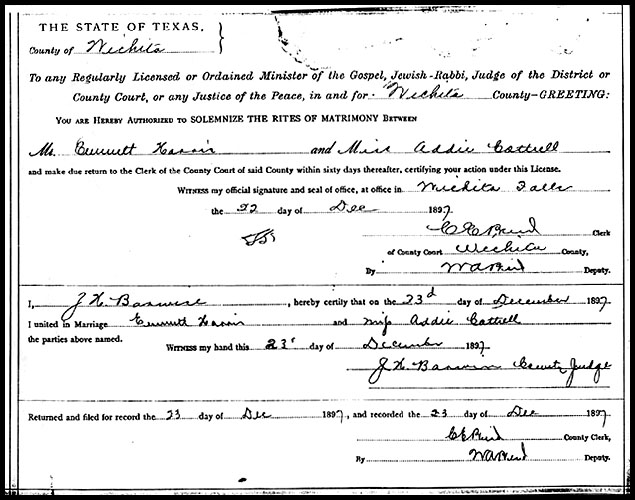 They married the next day, 23 December 1897, sitting in a buggy in front of the Wichita County Courthouse.8