Reader Karen Ansley Krugman hit paydirt in the legal notices section of the Bristol News, a newspaper published in the twin border cities of Bristol, Virginia, and Bristol, Tennessee, in September of 1873. Published one after the other were notices of two suits being brought against Mary A. Ligon, widow of John L. Ligon Sr., and a whole list of other folks very likely to be close relatives of the deceased John.

Both of the Chancery suits had been filed in the Circuit Court of Washington County, Virginia, and both were brought by estate representatives. One, by Sarah E. Davis, executrix of W.H. Davis, deceased, sought to recover $210.98 and asked the court to sell certain real estate to pay the debt.1 The other, by E.B. McClahanan, administrator of the estate of R.T. Lancaster, deceased, was trying to collect on “several debts” and also wanted the real estate sold.2

All of the named defendants were said to be non-residents of the Commonwealth of Virginia, so notice of the suits had to be published four times in the newspaper. And the nearest decently-sized city to the Washington County seat of Abingdon, Virginia, that had a newspaper was the state-line-straddling Bristol.

It’s a terrific find, made all the better by the fact that digital images of editions of the Bristol News are readily available in the Library of Congress’s Chronicling America : Historic American Newspapers site. That means, since the newspapers themselves are out of copyright, there are no restrictions on using the images in family histories, blogs, articles and what have you.3

But when Karen sat down with the notices, she ran into a snag. One of the parties named in each of the notices as a defendant was John D. Cosby, and both times he was identified as the administrator “de bonis non with the will annexed” of John L. Ligon Sr. And that’s a term she hadn’t run into before. What, she asked, did that mean?

Who handles an estate

In early days, as today, when someone died owning property — either real estate or personal property — that needed to be distributed to the heirs, a particular individual was required to take charge of that property and make sure it was distributed properly (not to mention that any debts got paid and, more importantly from the public perspective, that any taxes got paid).

What that person was called depended on whether he or she was chosen by the person who died and named in the deceased’s will or whether there was no will and a court or other local authority had to step in and choose someone.

Henry Campbell Black explained the difference this way: an administrator “in the most usual sense of the word, is a person to whom letters of administration, that is, an authority to administer the estate of a deceased person, have been granted by the proper court. He resembles an executor, but, being appointed by the court, and not by the deceased, he has to give security for the due administration of the estate, by entering into a bond with sureties, called the administration bond.”9

Seems pretty simple, right? But as Karen discovered, both executors and administrators come in different flavors.

An executor can be general or special; instituted or substituted; rightful or executor de son tort; and executor to the tenor.

• If the executor is charged with taking care of all of the estate all the time, he’s a general executor. If he only has charge of part of an estate, say the part in Alabama instead of the main estate in Georgia, or he only has some duties and not all, he’s a special executor.10

• If the will says, “my son John to be my executor but if he declines or will not serve, my brother Edward,” then John is the instituted executor. If John doesn’t serve or steps aside and Edward ever takes over, Edward is the substituted executor.11

• If the will is valid and the person named as executor handles the estate, then even before the will is probated, he’s the rightful executor. If there’s a problem with the will or if someone acts to handle the estate’s affairs before probate and he’s not the executor named, then he’s the executor de son tort.12

• And an executor to the tenor — a term used in ecclesiastical (church) law — is somebody who isn’t named as executor but is charged by the terms of the will with acting like one.13

Like executors, administrators can be general or special, but there are even more flavors within those two general types.

A general administrator is appointed to handle the whole estate in two cases:

• The deceased didn’t leave a will at all. In that case, an administrator is appointed with unlimited authority within the intestacy laws.14

• A person named temporarily to collect and preserve perishable property and to collect and pay debts, usually in another state away from where the decedent’s home was, is the administrator ad colligendum.16

• A person appointed temporarily to serve while a named executor is away from the jurisdiction and before the will can be proved is the administrator durante absentia.17

• A person appointed temporarily while the validity of the will is being contested in a lawsuit is the administrator pendents lite.18

• A person appointed temporarily while a named executor is still legally a minor is the administrator durante minori estate.19 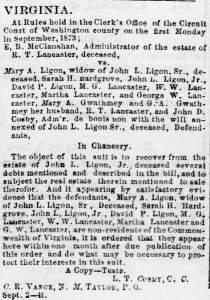 Exactly when John L. Ligon Sr. died isn’t clear. He was certainly alive in 1860, when he and his family were enumerated in the City of Richmond.26 By 1870, however, his wife Mary Ann was listed as head of household in Washington County.27 Where the family was by 1873 if not in Virginia isn’t known.

Ligon must have left a will or Cosby could not have been named administrator with the will annexed of any kind — that phrase means there had to have been a will in the first place.

And there must have been an earlier executor or administrator, or one named for another part of Virginia, since Cosby was the administrator de bonis non with the will annexed — again, that first phrase signifies that only some of the estate still needed to be administered.