Eyes on the prizes

Today, we will all be told many times, is the 200th anniversary of the declaration of war that officially began the conflict that became known as the War of 1812.

The President sent a message to Congress on 1 June 1812, calling for a declaration of war:

We behold our vessels, freighted with the products of our soil and industry, or returning with the honest proceeds of them, wrested from their lawful destinations, confiscated by prize courts no longer the organs of public law but the instruments of arbitrary edicts, and their unfortunate crews dispersed and lost, or forced or inveigled in British ports into British fleets, whilst arguments are employed in support of these aggressions which have no foundation but in a principle equally supporting a claim to regulate our external commerce in all cases whatsoever. We behold, in fine, on the side of Great Britain a state of war against the United States, and on the side of the United States a state of peace toward Great Britain.1 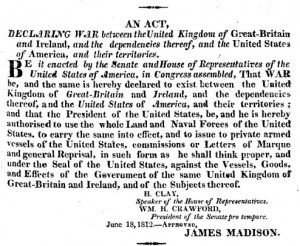 Just as it had during the Revolutionary War, the American government expanded its naval capabilities quickly by issuing letters of marque and reprisal to the masters of private American vessels.5 These were commissions allowing the private vessels to seize enemy ships and cargoes.6 And just as had been seen during the Revolutionary War, there were a lot of privateers involved in the War of 1812.7

And in order to comply fully with the statute, there had to be agreements between masters and their crews, formal actions with respect to British vessels and cargoes taken as prizes by the privateers, and lots and lots of official records. In particular, one set of exceedingly cool records exists and is accessible for free for the month of June at Fold3.com. These are the War of 1812 Prize Cases, Southern District Court, NY.

The U.S. District Court for the Southern District of New York sat then, as it sits now, in Manhattan, and it convened as a special prize court in New York City in August 1812, continuing its operations well into 1816. The records in this set take up nine rolls of microfilm — eight rolls of case files, plus one roll split between Privateers’ Papers and papers relating to the U.S. Frigate Essex.8 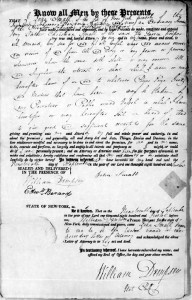 Now before you go thinking that these are just dull court records that couldn’t be of any value to a genealogist, let’s take a quick look at just a few of the Privateers’ Papers, shall we? Because these records are a goldmine, even if you didn’t have anyone on the privateers themselves.

• Do you descend from Francis Adams, son of Francis Adams of Castine in the County of Hancock, Maine? You can see the paper he signed as a minor over the age of 14 selecting Robert McFarland of Portland, a housewright in the County of Cumberland, as his guardian on 17 January 1811. Adams was a yeoman sailor on the schooner the Benjamin Franklin — one of the privateers with papers — 373 pages of papers — in this set.

• Perhaps your ancestor was Samuel Green who was a seaman aboard the Benjamin Franklinin July of 1812.He named his friend Eliphalet Butman as his agent to receive monies due from the master or owners of the ship on 17 July 1812. The power of attorney letter has his signature.

• Francis Corner was entitled to and got a ticket for one share in the prize money. He had issued a power of attorney to Barbara Klupner on 21 September which he signed with his mark. And, in that same set of papers, you’ll see that Francis executed a will at the same time leaving everything to Barbara Klupner. If you descend from either Corner or Klupner, think you’d like a copy of that will? Get it here.

• Trying to find a town of original for a Soloman Brant, mariner? When he named Margaret Lawler of New York to handle his affairs, he said he was “belonging Springfield State of Pennsylvania.”

• What did Mary Moncrieff of New York City do to earn her living? James Betton, mariner, gave her his power of attorney naming her as a boarding house keeper.

• Got any Neal ancestors from New York? John Davis gave his power of attorney to Priscilla Neal of the 7th ward in the city and county of New York and said she was the “Widow of the Late Cornelius Neal, deceased.”

All told, there are nearly 1100 pages of prize documents just in this one set of Privateers’ Papers. In the case files, you’ll find far more: depositions of witnesses, including full names, where they come from and, sometimes, relationships to others involved; records of courts martial; muster rolls; licenses for ships in British ports; receipts for payments to the widows, orphans and disabled seamen’s funds in England; even personal correspondence of British soldiers seized on board prize vessels. So these are great records no matter what side of the war your ancestors were on.

Now that’s The Legal Genealogist‘s idea of military records: the kind you find in court!