GovDocs for the non-GovDocs class

They’re called GovDocs here at the Institute for Genealogy and Historical Research — those wonderful, magical, marvelous windows to our collective past known as Government Documents. They’re so amazing in what they offer a researcher that there’s a whole course track in Advanced Library Research: Law Libraries & Government Documents. 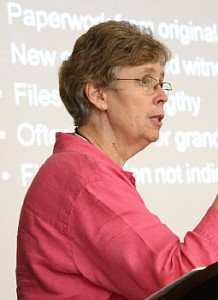 But oh boy… GovDocs ain’t just for the GovDocs students. And Ruth Ann Hager, library reference specialist at the Special Collections Department of the St. Louis County Library, has been proving that over and over in her presentations here, one on Antebellum and Civil War Government Documents and one on the Southern Claims Commission.

Now you’ll understand, of course, that The Legal Genealogist hung on every word Ruth uttered about state slavery statutes: laws that covered everything from the day-to-day rules governing the lives of slaves and of free people of color, to runaway slaves, from emancipation of slaves in some states to the re-entry of free people into slavery in others.

That’s because one of the questions we so often have to answer as genealogists — and as 21st century Americans — looking back at what people did in the 17th, 18th and 19th centuries is why people did what they did. And so very often the answer is: because the law said they had to. To find that answer, look in GovDocs: the statute books.

Ever want to know about the way medical and surgical treatment of wounds was handled — and the many ways it improved — during the Civil War? Have an ancestor who was wounded and want to know what kind of treatment he got? Have a curiosity about things like autopsies in the mid-19th century? There are answers in a set of records called the Medical and Surgical History of the War of the Rebellion — official records of the War Department, compiled by the Surgeon General and eventually published by the Government, in part for use as a teaching tool for the future.

Yep. Those are GovDocs too. Volumes of GovDocs.

Yep. GovDocs again. Thousands and thousands of ’em, and they’re just the selected documents, chosen because of their perceived historical significance.

Now armies and navies have to eat, of course, and supplying the troops in the Civil War was a task and a half. In large measure, the troops had to live off the land (or land and sea, in the case of naval forces). And that often meant taking what belonged to somebody else. In theory, at least, if the government took something for the Army or Navy, it had to pay for it. What folks got, in many cases, was a receipt and instructions to file a claim after the war.

You know what that produced, right? Yep. GovDocs, this time records of claims against the United States from as early as 1866 to as late as the early 1900s, including those processed by the Southern Claims Commission (1871-1880). And because only proper claims were to be paid, the records the Southern Claims Commission produced are absolutely voluminous, spanning hundreds, even thousands of pages for a single claim, which could last for years, even decades.

GovDocs. Full of names and places and events affecting ordinary people in extraordinary ways. Full of clues leading to our family’s history.