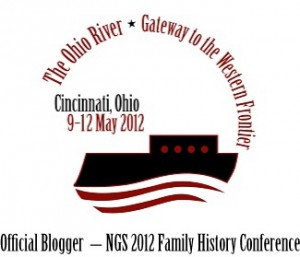 Okay, let’s see here. What three things stood out for me in Day Two of the National Genealogical Society conference in Cincinnati? Let’s try these: Germans; widow’s weeds; and records access.

It’s estimated that one out of every six Americans has German ancestors. (Count me in on that — my father and grandparents were born in Germany and came to the United States in 1925.1)

And the National Genealogical Society conference is in Cincinnati — a city with deep German roots. According to the website Cincinnati: A City of Immigrants:

In 1830, 5% of the city’s total population had German roots. Within ten years the number of German-born immigrants reached 30%, and that number doubled between 1840 and 1850. Backgrounds and dialects of the Germans varied and religions consisted of a mixture of Catholic, Lutheran, Reformed, and Jewish. Germans founded hospitals and various cultural institutions in the city. By the 1850s, the German language was used in four newspapers, in all church school classes, for sermons at church, and in transactions at banks and stores.2

So can somebody explain to me why the rooms set aside for lectures in Thursday’s German research track were among the smaller rooms at the conference center? Every single presentation, from 8 a.m. through to 5 p.m., was standing-room-only, or at least they would have been SRO if the fire marhsals had allowed folks to stand.

Sure was glad to see a wider variety of presentations on German research than in some past conferences. Some great new offerings on getting acquainted with German church records and marriage customs and laws. But it was a little disconcerting to hear one man literally beg for a seat, saying the German track was the one thing he’d come to the conference for. (And heartwarming, I should add, when another attendee gave up his seat, saying he’d catch the lecture on tape later.)

I absolutely adore the unusual and the out-of-the-ordinary in genealogy, so the luncheon by the Board for Certification of Genealogists was a real treat. There’s usually a speaker, and the speaker is usually worth hearing, but this year it was decidedly unusual and out of the ordinary.

Elizabeth Kelley Kerstens, CG, CGL, did an in-costume presentation called Lunch with Mrs. Davis, a dramatization of the life of a widow during the Civil War that was amazing. Using the setting of a widow — Mrs. Davis — writing in her diary, Liz took us on a tour of the social constraints placed on widows in the middle of the 19th century.

Heard the term “widow’s weeds”? It means the formal clothing a 19th century widow was expected to wear to signify her mourning.3 I had an idea of the meaning of the word, but Liz’s presentation — wearing the clothes of mourning — made the whole concept come alive: the year and a day of black dress and veil of full mourning; the time thereafter in half-mourning; the isolation of the widow and her dependence on her or her late husband’s male kin.

Great demonstration of history coming alive, and one that gave me an entirely different view than I’d had of a direct ancestor of my own who was widowed in the Civil War.

Towards the end of the day I had a chance to stop in at a session entitled Strategy for Records Preservation and Access conducted by the Records Preservation and Access Committee (RPAC). And I have to say I left there a little disconcerted. I realize I arrived late (I was not about to leave a session on German marriage laws that may help me with one of my own family history mysteries4) but there were so very few people there.

Perhaps many of the conference attendees didn’t realize the meeting was open to the public. Perhaps others had commitments to other sessions and felt they could not come in late. Perhaps it was just that it was late in the day.

But the truth is, folks, … winning the records access battles that genealogists face is critical to all of us. We really need to pull together for all of these fights: for the SSDI, for access to vital records and so much more. These battles can’t be won if they’re fought by only a few.