Neanderthal? Why, yes, of course! 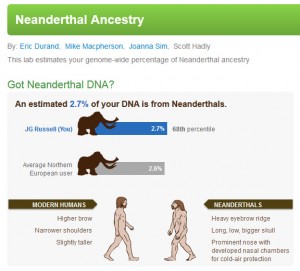 Approximately one to four percent of non-African modern human DNA is shared with Neanderthals,1 and, on average, folks without ancestry from Subsaharan Africa can expect to find about three percent of their genome hailing from Neanderthal ancestors.2 In fact, there’s not much more genetic difference between us and Neanderthals than there is between members of our various modern ethnic groups.3

As recently as 2006, there was widespread skepticism that there had ever been interbreeding between Homo sapiens (that’s us) and Neanderthals.4 It wasn’t until 2010 that studies began to confirm that there was such interbreeding and that modern humans carry Neanderthal genes.5 Later studies confirmed that the genetic link was shown in non-Africans, which means the interbreeding was probably a lot more recent in human history than we might have thought.6

In the words of one of the lead scientists on the studies, Svante Paabo of the Max Planck Institute for Evolutionary Anthropology in Germany, “What this means is that Neanderthals are not totally extinct. In some of us, they live on.”7

Today, those who’ve had DNA testing through 23andMe as I have can run one of the prototype Ancestry Lab functions and see just what percentage of Neanderthal genes they may have.8 And, according to 23andMe, folks like me whose DNA is predominantly northern European can expect to find about 2.6 percent of their genes are Neanderthal.9 Me, I test out at 2.7 percent, slightly higher than expected, in the 68th percentile.

Clearly, my modern human genes differ from the Neanderthals in key ways. As a Homo sapien, I may have a better chance at reproduction, I may be better able to heal after being injured and I’m probably better at sweating and otherwise reacting to the general environemnt than my older Homo neanderthalensis relatives.10 The one thing science doesn’t know is what it means for an individual like me to have some percentage of Neanderthal genes in my overall genome.

And another unanswered question is what it means to have more Neanderthal genes. Do folks have higher percentages of Neanderthal genes if they have a larger lower jaw or a more sloped forehead? Is the percentage higher in those who are hairier, or who are shorter, or who have longer arms? I do have a slightly higher than average Neanderthal percentage for a northern European, but I’m certainly no hairier than most folks (though I do have my father’s thick German eyebrows), and I’m certainly not short (though I do have my father’s long arms — we used to say he was one of the few people we knew who could pull up his socks without bending over).

Me, I choose to believe that my slightly-higher-than-average percentage of Neanderthal ancestry explains why I insist on doing things the right way instead of the easy way. And don’t disagree with me on that, or I’ll hit you with my club.