What conclusions can we draw from a marriage permission in Illinois in 1850? Not quite as much as we might hope…

Reader (and distant cousin) Kay Haden1 asks: “I have a marriage permission from Schuyler Co, Illinois, 1850. The father did not state specifically that the lady for whom he gave permission was his daughter although he did give her surname (as the same as his). Today in most states, only a parent or guardian can give permission for an underage child to marry… Can I assume that parenthood would have been legally required? He had a daughter of the right age in his household in 1840 and there are no other families of this surname living in the county at the time.” 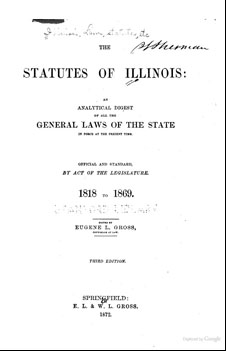 The answer can be found in the Illinois statutes in effect at that time:

All male persons over the age of 17 years, and females over the age of 14 years, may contract and be joined in marriage : Provided, in all cases where either party is a minor, the consent of parents or guardians be first had, as is hereinafter required.2

Now Kay is a very careful and thorough researcher, so she knows that there’s more to this question than just what the law says. As Elizabeth Shown Mills teaches, “Sources give us information from which we select evidence for analysis. A sound conclusion may be considered proof.”3 In this case, as in most cases, the law is just one source, along with the census records, the records showing families with this name and the other records Kay has found. The contents of those sources provide information (that some permission was required, that there was a female of the right age in his 1840 household), and Kay has selected facts from the entirety to focus on as evidence. The last step is the sound conclusion.

And it’s that last step that usually gives me running fits. I always have to ask myself: have I looked at all the sources that might reasonably suggest an answer here? The Genealogical Proof Standard requires us to conduct “a reasonably exhaustive search” of the records before we reach a conclusion.4 In this particular case, I’d want to look at a few things more to feel comfortable in reasonably ruling out the possibility that the female in 1840 could have been niece (or other collateral relative), not daughter. I’d want to know try to find this family in 1830 to see whether there were other families with that surname in THAT area. I’d want to look at the court records there and in Schuyler County to see if there was any indication of a death in another family that could have put a female child into this family. I’d try to find obituaries of the father and any other known children of the father to see if this woman was listed as a daughter or sister. I’d look for probate records for the father and other known children to check for any evidence of a relationship.

Kay’s going to be at Rootstech in Salt Lake City early next month and had already scheduled extra time at the Family History Library to look for the answers to these questions long before she asked about the statute. I can’t wait to hear what she finds.